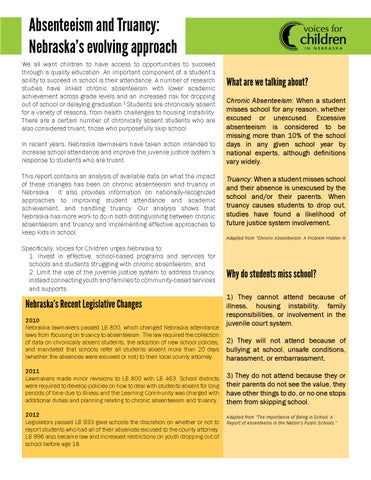 Absenteeism and Truancy: Nebraska’s evolving approach We all want children to have access to opportunities to succeed through a quality education. An important component of a student’s ability to succeed in school is their attendance. A number of research studies have linked chronic absenteeism with lower academic achievement across grade levels and an increased risk for dropping out of school or delaying graduation.1 Students are chronically absent for a variety of reasons, from health challenges to housing instability. There are a certain number of chronically absent students who are also considered truant, those who purposefully skip school. In recent years, Nebraska lawmakers have taken action intended to increase school attendance and improve the juvenile justice system’s response to students who are truant. This report contains an analysis of available data on what the impact of these changes has been on chronic absenteeism and truancy in Nebraska. It also provides information on nationally-recognized approaches to improving student attendance and academic achievement, and handling truancy. Our analysis shows that Nebraska has more work to do in both distinguishing between chronic absenteeism and truancy and implementing effective approaches to keep kids in school. Specifically, Voices for Children urges Nebraska to: 1. Invest in effective, school-based programs and services for schools and students struggling with chronic absenteeism; and 2. Limit the use of the juvenile justice system to address truancy, instead connecting youth and families to community-based services and supports.

Nebraska’s Recent Legislative Changes 2010 Nebraska lawmakers passed LB 800, which changed Nebraska attendance laws from focusing on truancy to absenteeism. The law required the collection of data on chronically absent students, the adoption of new school policies, and mandated that schools refer all students absent more than 20 days (whether the absences were excused or not) to their local county attorney. 2011 Lawmakers made minor revisions to LB 800 with LB 463. School districts were required to develop policies on how to deal with students absent for long periods of time due to illness and the Learning Community was charged with additional duties and planning relating to chronic absenteeism and truancy. 2012 Legislators passed LB 933 gave schools the discretion on whether or not to report students who had all of their absences excused to the county attorney. LB 996 also became law and increased restrictions on youth dropping out of school before age 18.

What are we talking about? Chronic Absenteeism: When a student misses school for any reason, whether excused or unexcused. Excessive absenteeism is considered to be missing more than 10% of the school days in any given school year by national experts, although definitions vary widely. Truancy: When a student misses school and their absence is unexcused by the school and/or their parents. When truancy causes students to drop out, studies have found a likelihood of future justice system involvement. Adapted from “Chronic Absenteeism: A Problem Hidden in

Why do students miss school? 1) They cannot attend because of illness, housing instability, family responsibilities, or involvement in the juvenile court system. 2) They will not attend because of bullying at school, unsafe conditions, harassment, or embarrassment. 3) They do not attend because they or their parents do not see the value, they have other things to do, or no one stops them from skipping school. Adapted from “The Importance of Being in School: A Report of Absenteeins in the Nation’s Public Schools.”