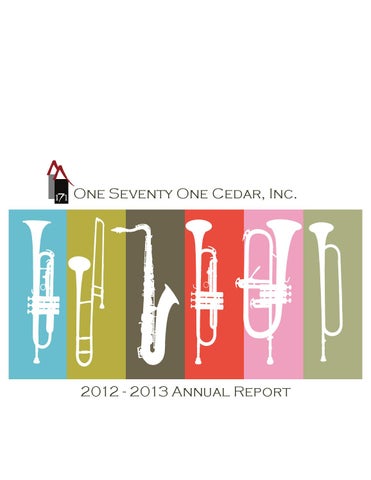 fiscal year 2012/2013 Reflections As part of a vibrant community arts center, we at 171 embrace every opportunity to help people uncover the power and possibilities waiting to be discovered through participation in the arts. As we celebrate record numbers of people through our doors one might think we’ve reached the pinnacle of what our founders dreamed for 171 when they founded the center, forty-six years ago. What we believe is that they did not see a summit, but a desire for 171 to stand the test of time. Today 171 enjoys a regional reputation as a premier provider of arts education; dedicated to providing life-long enrichment by delivering impactful arts opportunities.

You don’t get there by bus, only by hard work, risking, and by not quite knowing what you’re doing. What you’ll discover will be wonderful: yourself. - Alan Alda

171’s exceptional faculty members – some of the region’s finest dancers, musicians, visual artists and more – continue this tradition of excellence by sharing their passion and engaging students. In Fiscal Year 2012-13, they taught 2,687 students – the largest enrollment in 171’s history. Together, these individuals spent thousands of hours in classes encompassing all disciplines, from contemplative landscape and figurative painting, to Hip Hop’s high-energy choreography. This year, in order to support the needs of our teaching artists and provide a better experience, 171’s Personnel Committee undertook the major project of reviewing 171’s current method of employee classification, in an attempt to better understand Federal/State laws and to ensure our compliance with current practices and laws. The Committee facilitated the successful transition of more than 50 faculty members from contractor to employee status. All faculty are now supported by standardized employment practices and updated personnel policies. Our organizational journey has spanned 46 years. As we continue to build momentum, we remain steadfast in our belief that the integration of arts and culture into daily life is critically important. 171 is built on strong relationships, and our success depends on our ability to bring people and organizations together in support of arts and culture. We thank each and every one of you, as visitors to the gallery, students in classes, supporters of our mission, and advocates for the essential role 171 plays in our lives.

From the Board President Dear friends of 171, As we finish yet another year of wide-ranging programs and entertaining events and exhibits, I am proud to say that we remain financially healthy and vibrant. Our faculty, staff, and students continued to sustain 171’s dynamic culture and generous donors sponsored new events. While we continued our ever-popular programs and events, we also recognize that federal and state support of the arts is changing both in terms of grants to not-for-profits and in art and music offerings in schools. So we began exploring new ways to support our mission with programming changes and new ideas for fund development. We look forward to your continued support and feedback as we update our offerings and remain your community arts center! Sincerely,

about 171 Our Vision 171 enriches our community through the arts

■ Interest and Gains on Investments

A copy of 171’s most current financial statement is available upon request. We make every effort to maintain accurate records, and apologize for any errors or omissions. Please contact HustonK@171CedarArts.org with questions or corrections.

Established in 2007, with funds generously made available to the Center from the family of Charlene Coleman Holland. This Scholarship commemorates her interest in the richness of the region’s arts and cultural community. Mrs. Holland was deeply committed to furthering music education and programming in the area and was instrumental in establishing the Center’s first Suzuki program. Additionally, Charlene was the first Executive Director of the Chemung Valley Arts Council (aka The ARTS Council of the Southern Finger Lakes) in 1973 and lived in the Corning-Elmira area from 1963 to 2001, when she relocated with her husband to Salt Lake City, Utah, upon his Students from Young Chefs’ Cooking School enjoy a picnic on the Drake House Lawn with retirement. Holland Scholarships are awarded to exceptional students taking private, instructor Nithya Krishnan or group, piano and/or string lessons at the Center. Fiscal Year 12/13 Recipients: Rebecca Caudill, Cristian Lau, Suyen Lau, Autumn Rose Lester, Jason Liang, Sarah Osburn, Erica Thomas, Ruby Williams

Established in 2010, with funds donated by Chretien Risley in honor of his influential and well-respected piano instructor Frances McLaren, and in memory of beloved regional musician Carole L. Bigler. Awards from this scholarship are given so as to fuel passion, encourage learning, and cultivate philanthropic spirit in the arts. Students seeking to engage in the Center’s multi-disciplinary arts-programming may receive awards to study ceramics, dance, language, visual arts, theater, music, literature and writing. “Our goal in giving this grant is to provide a bridge for talented and motivated students who are otherwise unable to afford study, to do so. We believe that 171 is the kind of place that fosters artistic development, discipline and good citizenship and we hope that the recipients will pass from childhood as people for whom giving back to their community is essential and expected.” -- Chretien Risley, Caplin Foundation Director Fiscal Year 12/13 Recipients: Sara Case-Kneeland, Anastasia Gevegy, Mary Bieser, Mattie Edinger-VanAtta, Suleman Javed, Abdullah Javed, Reed Family, Colin Hurlburt, Paige Hughey, Dayne Hughey

Newly created in 2013, by alumni from the Class of 1985 – awards $100 to a student nominated by their art instructor, who shows great promise in the fields of arts, graphics, architecture, illustration, etc. Fiscal Year 12/13 Recipients: Logan Henry

The ARTS Council of the Southern Finger Lakes Summer Scholarship: $500

contributors The following contribution levels are determined by the total of all gifts given during Fiscal Year 2012-2013 (September 1, 2012 - August 31, 2013), including: membership, unrestricted gifts, participation in fundraising events, restricted gifts, and gifts of stock and property.

* Thank you to regional corporations for matching these gifts.

members of 171 171 Cedar Arts Center is member supported; the following lists of 171 members includes everyone whose membership was active during fiscal year 2012-2013. We appreciate your ongoing support!

Students create and decorate bowls in the Woodcock Ceramic Studio as part of 171â&#x20AC;&#x2122;s annual Making Real the Dream Day, celebrated each year in honor of Martin Luther King, Jr.

Board of Directors Executive Officers

†A warm thank you is extended to those who completed their service on the board in 12/13. One Seventy One Cedar, Inc.

The trodden path of an Artist is paved by passion and commitment. It is a journey which eventually leads to the joy of bringing forth creativity in others. -Patrice Donnelly

Thank you for being a community partner!

171 depends on the generosity of more than 100 volunteers each year. Volunteers lend their time and skills to fundraising events, classes, repairs and maintenance, and gardening. We thank you for supporting 171 through your willingness, commitment and hard work. 171 Cedar Arts Center receives general operating support made possible by the New York State Council on the Arts with the support of Governor Andrew Cuomo and the New York State Legislature. Annual Report layout and design by Willa Rose Vogel 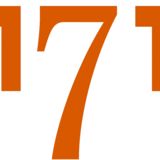