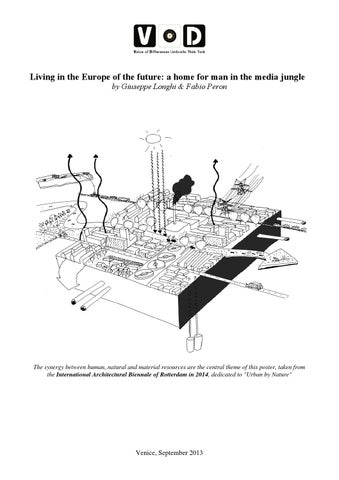 Living in the Europe of the future: a home for man in the media jungle by Giuseppe Longhi & Fabio Peron

The synergy between human, natural and material resources are the central theme of this poster, taken from the International Architectural Biennale of Rotterdam in 2014, dedicated to "Urban by Nature"

Living in the Europe of the future: a home for man in the media jungle by Giuseppe Longhi & Fabio Peron

Future living in Europe might be interpreted through the synergy between the dynamics of human resources, the quality of manufactured goods and the city structure. Human resources During the last decade we moved rapidly from the representation of society characterised by Colin Clark's1 (1940) tripartition, based on the articulation of economic activities in the primary, secondary and tertiary sectors. These were referenced to stability of employment, living conditions, intracommunal relationships and secure economic welfare, catering to the needs of a growing and significantly diverse population, in terms of heritage and capabilities. This model divides the population into three groups2: the many, the new and the connected. The "Many" are the result of the demographic revolution underway with its increase in numbers, cultural diversity, urbanization and modernization processes. The "New" refers to those social and economic groups capable of developing new products and services that are able to take advantage of opportunities and ethical choices connected with the opening up of the new technological frontiers. The "New" are defined by their high levels of education, their ability to start new businesses, the efficacy of their relationships with the new stakeholders in the urban landscape, their ability to develop new networks and partnerships across different cities. The "Connected" are defined by their successful interactions with communication technologies, taking hold of new opportunities and interdependencies opening up in the social and economic spheres, recognizing the speed of change and new problems occurring as the result of rapid knowledge and transfer of information. These in turn may be divided into five categories3, in relation to their level of digital literacy, ranging from the 'natives'; namely, those who grew up in the digital age and are perfectly at ease with the new tools and methods of communication, to the 'illiterate', i.e. those who deny or ignore the existence of change. Any estimation of human resources should highlight how housing should ideally be connected to a creative environment, capable of stimulating new skills in regard to a population in a state of flux. Quality of housing Nowadays, artefacts designed for habitation are substantially different from those in the past, even recent ones. In point of fact, taking the second industrial revolution as a temporal point of reference, the function of housing was meeting the basic needs of a generally stable population, with a fixed income, thanks to 'durable' physical structures (albeit less durable than buildings in the preindustrial age), with a level of connectivity that today we would think of as primitive. Effective connectivity is an important requirement in the improvement of living standards, marking the start of the era of large-scale hygienic dwellings, by means of utility services such as water, sewerage and electricity - all of which are delivered to every home. These were followed by the fixed telephone network, marking the start of the dematerialization process. The key features of this generation of buildings can be summarized as follows:  their structure and characteristics were (from the economic perspective) a function of income produced elsewhere (in factories, in commerce, etc.). So their shape and form were closely related to the income produced by way of profits, wages and social policies;  From a bio-physical point of view, these were bulky, so-called "eso-machines"4, extensions of the human body, such as cars. Historically speaking, these cumbersome eso-machines (house and car - serving as artificial extensions of human skin and limbs), comprised the modern city.  they were produced through the subtraction of natural resources, with little regard for emissions; structures whose metabolism therefore remained ‘open-ended’. These features belong to an era in European history that was based on the stability of income and on the high consumption of natural resources but today these conditions are no longer socially,

economically and environmentally sustainable. Nowadays, the European Union defines the building5 as "an intelligent artefact whose purpose is to facilitate the exchange of knowledge, thanks to the availability of cybernetic media, in order to improve the welfare of its inhabitants, to facilitate their work and social relationships and to produce energy and food". The home, from its inception as a mere component of the myriad monofunctional elements comprising the city, is being transformed into a productive unit capable of generating goods and services. The principal feature of the new habitation infrastructures in respect of services lie in its ubiquity. Thanks to interactive communication technologies, it is being designed to carry communications and information, to 'understand' those who inhabit or utilise the structural environment, and to interact with them at any time, along the lines of the "Ubiquitous B2P" (B = Building, P = People). It is therefore capable of optimizing the functions of daily life, such as socializing, work, culture, etc., with particular attention to the disabled and the elderly. Moreover, the new buildings are capable of producing the following:  energy from renewables, as components of 'intelligent grids', to satisfy the requirements of self-sufficiency in energy, following European Union directives;  contributing to urban food self-sufficiency (as in urban farming) and the increase in biodiversity. They are thus environmentally integrated, contributing to the creation of cities with lower urban carbon footprints due to their 'closed' metabolism, thanks to input minimization and zero emissions. They are also more resilient and capable of resisting the effects of climate change. New housing models and the regeneration of the European City Innovation in housing models should be understood as an important component in the regeneration of European urban centres, countering the trend towards the sterile conservation of bygone splendour. Renewed design culture must be capable of re-evaluating new social and spatial morphologies, overcoming traditional functional paradigms, in favor of more dynamic and regenerative models. The renewed urban habitat should be a highly mobile entity comparable to a beehive or a school of fish, moving easily in groups and capable of suddenly changing direction. These models are generating new forms of social and urban organization, displacing the historical "sedentary" paradigms, in favor of settlement patterns inspired by "nomadism" re-evoking the dichotomy between nomadic and sedentary, evoking the account related in the Book of Genesis6. So, farewell to the design principles inherited from the industrial age, in response to the changing demand for new living requirements called for by the principles of receptivity and hospitality, instrumental in the creative development of citizens. The core motivation for the planning of the social “hive” is an understanding of the needs of a new receptivity and countered by the resistance towards diversity and novelty. In this way, the somewhat neglected and fundamental value of hospitality in the design, may be regained. The reformulation of European settlement patterns requires a radical renewal of existing infrastructures and models of governance, amounting to a Green "New Deal"7, capable of combining development with social cohesion and the managment of environmental loads. The Green "New Deal" is consistent with an urban model based on the principle of acceptance of "barbarians, foreigners and infidels"i, following the principles of the "civitas romana"ii, stimulating the city with the creative force of diversity, countering the present-day "manhattanization" (as Solow, Jacobs, Forrester , Romeriii put it), reaffirming the growth of human resources as the key factor in urban development. Thanks to the growth in smart technologies, a new path is being opened through the reorganization of social and organizational urban processes along increasingly horizontal lines, whose aim is the reformulation of values associated with well-being: from material sufficiency to self-improvement, thanks to a collaborative development project known as 'the art of contented sobriety'iv. Housing design thus becomes a positive driving force, counterposing the strategy of fear, fueled by the current crisis. Its prolongued temporality makes allows us to understand the momentous changes taking place, the effects they might have and the opportunities for appropriate responses. In

this sense, the organizational paradigm of the new residential settlements may be seen as akin to a creative workshop. If it is accepted that the principle of Hope is the underpinning of the new approach to housing projects in the furtherance of the development of human resources, then Responsibility may be seen as the supplementary driving force powering contemporary design, especially concerning the utilization of natural resources. This principle is significantly impacting on contemporary design thinking, with strong support from the UNDEP Millennium Convention, in several important ways:  change away from the principle predicated upon the removal of raw material from the environment to one based on flow management, redefining the project in increasingly ‘holistic' terms, as the result of the metabolizing of resourcesv.  broadening the concept of infrastructural value based upon natural resourcesvi and, at the same time, integrating the concept of economic value (historically identified with physical manufacture) with that resulting from environmentally-generated goods and services. The value of the latter would exceed that of manufactured products due to the tendancy towards depletion.  limits placed on new settlements or greenfield expansion, in line with the goals set out by the International Conventions on the Environment, promoting the reconstruction or regeneration of decaying zones in a city whose carbon footprint is equal to one. The “One Planet” methodology put forward by WWF International follows this principle.  the increasing role of dematerialization, thanks to the growing productivity of etherial networks and cybernetics, introducing bits into the traditional domain of atoms in project developmentvii  the amplification of human capabilities through biological and IT processes together with a decrease in the role of intrusive "eso-machines". Consequently, the main aim of the new housing project is to reduce dependance on bulky machines (i.e. the car, the house, domestic appliances, etc.) as extensions of the human body and with the help of nanotechnology, the utilization of micro-machines embedded in human body and etherial devices, such as the new telecommunications technologies, as extensions of the brain. According to Toyo Itoviii, Man no longer has the need to go out into the outside world protected by protective, shell-like armour. He can now wear lightweight, wired and flexible media clothing, embodying the swirling computer vortex. Toyo Ito concludes that "The man wrapped in a suit of this kind is like Tarzan in the media jungle". 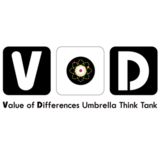 Living in the Europe of the future: a home for man in the media jungle

Future living in Europe might be interpreted through the synergy between the dynamics of human resources, the quality of manufactured goods...

Living in the Europe of the future: a home for man in the media jungle

Future living in Europe might be interpreted through the synergy between the dynamics of human resources, the quality of manufactured goods...