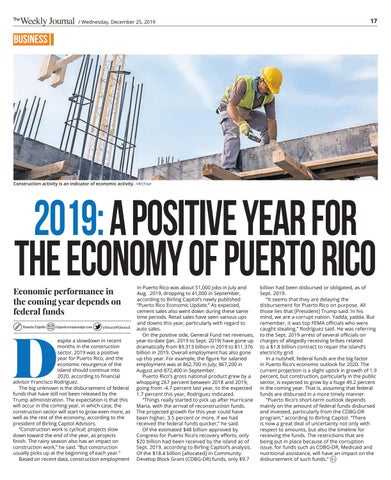 Construction activity is an indicator of economic activity. >Archive

2019: A Positive Year for the Economy of Puerto Rico Economic performance in the coming year depends on federal funds

espite a slowdown in recent months in the construction sector, 2019 was a positive year for Puerto Rico, and the economic resurgence of the island should continue into 2020, according to financial advisor Francisco Rodríguez. The big unknown is the disbursement of federal funds that have still not been released by the Trump administration. The expectation is that this will occur in the coming year, in which case, the construction sector will start to grow even more, as well as the rest of the economy, according to the president of Birling Capitol Advisors. “Construction work is cyclical; projects slow down toward the end of the year, as projects finish. The rainy season also has an impact on construction work,” he said. “But construction usually picks up at the beginning of each year.” Based on recent data, construction employment

in Puerto Rico was about 51,000 jobs in July and Aug. 2019, dropping to 41,000 in September, according to Birling Capitol’s newly published “Puerto Rico Economic Update.” As expected, cement sales also went down during these same time periods. Retail sales have seen various ups and downs this year, particularly with regard to auto sales. On the positive side, General Fund net revenues, year-to-date (Jan. 2019 to Sept. 2019) have gone up dramatically from $9.313 billion in 2019 to $11.376 billion in 2019. Overall employment has also gone up this year. For example, the figure for salaried employment was at 862,700 in July; 867,200 in August and 872,400 in September. Puerto Rico’s gross national product grew by a whopping 267 percent between 2018 and 2019, going from -4.7 percent last year, to the expected 1.7 percent this year, Rodríguez indicated. “Things really started to pick up after Hurricane Maria, with the arrival of reconstruction funds. The projected growth for this year could have been higher, 3.5 percent or more, if we had received the federal funds quicker,” he said. Of the estimated $48 billion approved by Congress for Puerto Rico’s recovery efforts, only $20 billion had been received by the island as of Sept. 2019, according to Birling Capitol’s analysis. Of the $18.4 billion [allocated] in Community Develop Block Grant (CDBG-DR) funds, only $9.7

billion had been disbursed or obligated, as of Sept. 2019. “It seems that they are delaying the disbursement for Puerto Rico on purpose. All those lies that [President] Trump said. In his mind, we are a corrupt nation. Yadda, yadda. But remember, it was top FEMA officials who were caught stealing,” Rodríguez said. He was referring to the Sept. 2019 arrest of several officials on charges of allegedly receiving bribes related to a $1.8 billion contract to repair the island’s electricity grid. In a nutshell, federal funds are the big factor in Puerto Rico’s economic outlook for 2020. The current projection is a slight uptick in growth of 1.9 percent, but construction, particularly in the public sector, is expected to grow by a huge 49.2 percent in the coming year. That is, assuming that federal funds are disbursed in a more timely manner. “Puerto Rico’s short-term outlook depends mainly on the amount of federal funds disbursed and invested, particularly from the CDBG-DR program,” according to Birling Capitol. “There is now a great deal of uncertainty not only with respect to amounts, but also the timeline for receiving the funds. The restrictions that are being put in place because of the corruption issue, for funds such as CDBG-DR, Medicaid and nutritional assistance, will have an impact on the disbursement of such funds.” 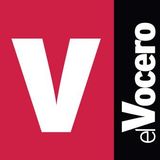