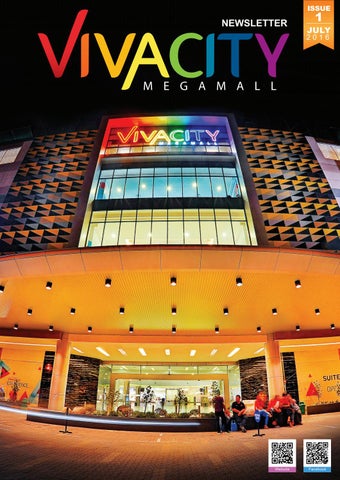 Greetings from Vivacity Megamall! Before we begin, I would love to firstly extend our greatest appreciation to all our shoppers, tenants and business partners for your continuous support since our opening on the 12th December 2015 and still going strong till this day. With over 300 international, regional and local brands, Vivacity Megamall has brought the retail standards to the next level and also bringing the most diverse and best dining experience to Kuching. In our first issue, Maxis had launched their 4G LTE in April. Next up was Airasia Travel Fair where shoppers got the chance to grab tickets to interesting destination for a cheap price. Ending the month of April with a high note was the Spring-Summer Fashion Show; With many international fashion brands showcasing their latest Spring and Summer collection, and models strutting it on the catwalk. The following month was filled with sounds of drums, cymbals and gongs reverberating through the mall as the Sarawak Southern Lion Dance held their championship here to select a winner whom shall represent Sarawak in the national competition. These highlighted events have attracted huge crowds to our mall in the past few months. Secondly, there will be a ‘Shop &amp; Draw’ Lucky Draw with a total share of RM69,888 to be won. Six special draws will be conducted on the 28th of every month, starting from June until November with a Grand Prize of RM1,888 and the Grand Draw which will be held on 12th December 2016 with a Grand Prize of RM18,888! How to join? It’s easy! Just spend a minimum of RM100 in a single receipt in any store in Vivacity Megamall and you may be the next winner! Enough of the long talks. There is more to say but we shall let the pages tell the tales. We hope you enjoy going through this issue and for more information on the latest happening and promotions, check us at our Facebook page or visit our website at www.vivacity.com.my Cheers! Ivy Lai Vivacity Megamall

* Dates are subjected to change. Please refer to Customer Service for latest confirmation.

M A visitor at the event trying on a Google glass with Maxis 4G. (Photo: The Star Online)

axis No.1 4G LTE was launched at Vivacity Megamall on 1st April 2016 until 3rd April 2016. Youtube stars, Joyce Chu and Stella Chen were invited to the launch of event. During the launching of Maxis 4G LTE, Morten Bangsgaard, the Chief Technology Officer of Maxis mentioned Malaysian love the internet and it is changing the way we live and work. He also said that data usage for 4G users in these states is also higher with an average of over 3GB per month. He said that to date, Maxis has 4G coverage of more than 90 percent in Kuching and Kota Kinabalu and more than 80 percent in secondary and tertiary towns. More Maxis Sarawak customers can now enjoy fibre-like speeds with Maxis 4G which has been expanded to even more locations beyond key towns in Sarawak.

Besides, major sponsors of this fashion show were – ‘Volkswagen’, ‘Honda’ and ‘Mitsubishi’; special sponsors ‘Ogawa’, ‘belif ’, ‘Caffe Bene’ in particular ‘Tony Moly’ from provided models’ makeup and official hairstylist - ‘Trendzcut’ for their generous supports and participation. Also, there were performances from The Prime band and Soul Dance which complement the fashion show.

Scan me for video!

Scan me for more photos!

he Sarawak Heart Foundation in collaboration with Yayasan Jantung Malaysia had organized the Kuching heart week from 20/5/2016 to 22/5/2016. The event which carried the theme “Heart Awareness” was held at East Atrium, Vivacity Megamall daily from 10 am to 9pm. During these 3 days events, members of public had the opportunity to undergo free daily health screening which included checking of body mass index, blood glucose, cholesterol level as well as health counselling from medical personnel. A free public health talk entitled “ How to prevent stroke and heart attack: has be delivered by Dr Chai Chun Hian, consultant neurologist, Kuching medical Centre, Several activities have been organized in conjunction with heart week which include free anti-smoking test, CPR (cardiopulmonary resuscitation) demonstration, family group games, balloon twisting, physical activities like gymnastic, Zumba, aerobic and folk dance. There was also a kids’ artwork (3D and Felt craft) for 7 to 12 years old kids.

YABhg Datin Patinggi Dato Hajjah Jamilah Anu, wife of chief minister of Sarawak and board of trustee, Sarawak heart foundation had officiated the launching ceremony on 21st May 2016. The heart week campaign is being supported by Coramax Mall Sdn. Bhd, Sarawak Heart Centre and Fitness Centres in Kuching.

Various activities have been organized by Sarawak Heart Foundation (SHF).

arawak Southern Traditional Lion Dance Championship 2016 was launched at Vivacity Megamall on 4th June 2016. Sixteen teams from around Sarawak were there to compete using the Southern Traditional Lion Dance style for two days. Dr Sim, the president of Sarawak United Peopleâ&amp;#x20AC;&amp;#x2122;s Party (SUPP), pointed out that not only the Chinese practice this art, but it sees participation from the Bumiputeras as well. The team from Chinese Martial Arts Association Kuching has secured a spot in the National Southern Traditional Lion Dance Championship 2016 this October, after beating 12 other contenders in the final of the statelevel competition. The winning troupe took home a trophy, gold medals, cash and also the official shirts for them to wear during the national-level competition.

Jonathan (standing front, fourth right), flanked by Lee on his left and Lim, presents the trophy to the champion team.

Dr. Sim together with the representatives &amp; participants of the Sarawak Southern Traditional Lion Dance Championship 2016

Exciting performance by one of the team during the competition.

Wushu performance during the opening ceremony.

16 teams lined up at the E Atrium, getting ready for the opening ceremony.

Scan me for more photos!

Group photo of Ah Niu and the mascot, Ah Huat together with the team member.

h Huat Parents Day roadshow was held at Vivacity Megamall ground floor from May 27 to 29 from 10am to 10pm. There were various Happy Hour promotions going on during the three-day roadshow and free photo session with Ah Huat mascot. Besides lucky draw, there was a meet and greet session with Ah Huat spokesman Malaysian singer, Ah Niu. Fans who purchased a certain number of Ah Huat products are eligible for Ah Niu’s autograph and snap a photo with him. Apart from that, customers are entitle to win a three-day and four-night luxurious cruise trip for four onboard the Mariner of the Sea with Ah Huat Parent’s Day promotion by purchasing Ah Huat products and accumulate 10 points by cutting out the barcode on the packet or the pull ring from the canned product. This Parent Day promotion encourages filial piety and gratefulness to parents.

Ah Niu interacts with the public during the meet &amp; greet session.

from the land of Ho

ayu Guru Gerai Nyamai! The Harvest Festival has arrived. A special Bidayuh bamboo bridge was built and it became the center or attraction for many people of all walks of life, as it lets many experience walking on one. With the Gawai decorations up at the Center atrium, performers of the traditional ngajat entertained the crowd during the first and second day of Gawai celebration. Sape performance from “Gilbert and the Gang”, whom travel the world spreading the love for Iban music, entertained the crowd with their performance. Booths selling traditional confectionaries as well as attire were offering shoppers opportunity to own a traditional Dayak and Bidayuh costume as well as handicrafts. Special colouring contest pits skills from kids of age 7 to 12 years old.

Handsome and beautiful Iban performers getting ready with their traditional coustme before the show.

Sape performance by “Gilbert and the Gang”. 10 |

rnbill - Gawai Festival Few Gawai booths had been set up selling traditional dayakâ&amp;#x20AC;&amp;#x2122;s hand-crafts and tid-bits in conjunction with the Gawai Festival.

n conjunction with Hari Raya Aidilfitri 2016, Vivacity Megamall has been decorated with Raya decorations; With fairy lights illuminating the golden diamonds and dazzling greenish decorations hanging around the C Atrium, illuminating the atrium with thousands stars and together with the retro music playing throughout the month signifying the month of Ramadhan. Collaborating with the Consulate General Republic of Indonesia Kuching, we have organised a mini Ramadhan bazaar as well as various live shows at our C. Atrium. Along the month, there are various interesting activities during this festive season. Do visit our Facebook page and website for more information. Last but not least, we would like to wish all our Muslim friends Selamat Hari Raya Aidilfitri, Maaf Zahir dan Batin!

n the month of Ramadhan, the Consulate General of the Republic of Indonesia Kuching has organised an Indonesian Product Festival. The Festival showcases quality products from Indonesia’s Small-Medium Enterprise (SME), consisting 20 booths from various industries promoting and selling their products during the month of Ramadhan.

The Festival was officiated on the 12th June 2016 by Mr. Jahar Gultom, the Consul-General of Republic of Indonesia, with YB Datuk Lee Kim Shin, Assistant Minister for Tourism, Datu Ik Pahon Anak Joyik, Permanent Secretary of Ministry of Tourism Sarawak and Dato’ Wee Hong Seng from DBKU. A famous band in Indonesia, “La Vista” was specially invited to perform during the officiating ceremony and also to provide musical entertainment for that day, and also sape performance by 2 young talented men. The fair runs from the 8th June till 3rd July 2016 at the Center Atrium.