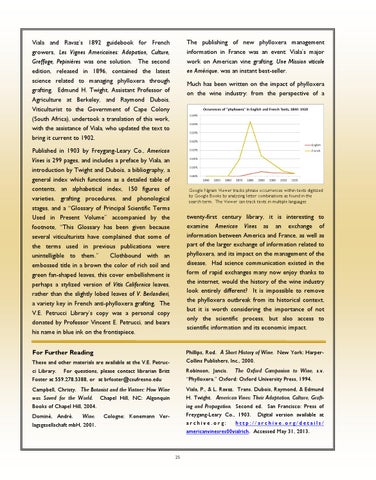 Much has been written on the impact of phylloxera on the wine industry: from the perspective of a

Agriculture at Berkeley, and Raymond Dubois, Viticulturist to the Government of Cape Colony (South Africa), undertook a translation of this work, with the assistance of Viala, who updated the text to bring it current to 1902. Published in 1903 by Freygang-Leary Co., American Vines is 299 pages, and includes a preface by Viala, an introduction by Twight and Dubois, a bibliography, a general index which functions as a detailed table of contents, an alphabetical index, 150 figures of varieties, grafting procedures, and phonological stages, and a “Glossary of Principal Scientific Terms Used in Present Volume” accompanied by the footnote, “This Glossary has been given because several viticulturists have complained that some of the terms used in previous publications were

Google Ngram Viewer tracks phrase occurrences within texts digitized by Google Books by analyzing letter combinations as found in the search term. The Viewer can track texts in multiple languages

twenty-first century library, it is interesting to examine American Vines as an exchange of information between America and France, as well as part of the larger exchange of information related to phylloxera, and its impact on the management of the disease. Had science communication existed in the form of rapid exchanges many now enjoy thanks to the internet, would the history of the wine industry look entirely different? It is impossible to remove the phylloxera outbreak from its historical context, but it is worth considering the importance of not only the scientific process, but also access to scientific information and its economic impact.

unintelligible to them.” Clothbound with an embossed title in a brown the color of rich soil and green fan-shaped leaves, this cover embellishment is perhaps a stylized version of Vitis Californica leaves, rather than the slightly lobed leaves of V. Berlandieri, a variety key in French anti-phylloxera grafting. The V.E. Petrucci Library’s copy was a personal copy donated by Professor Vincent E. Petrucci, and bears his name in blue ink on the frontispiece.

For Further Reading These and other materials are available at the V.E. Petrucci Library. For questions, please contact librarian Britt Foster at 559.278.5388, or at brfoster@csufresno.edu