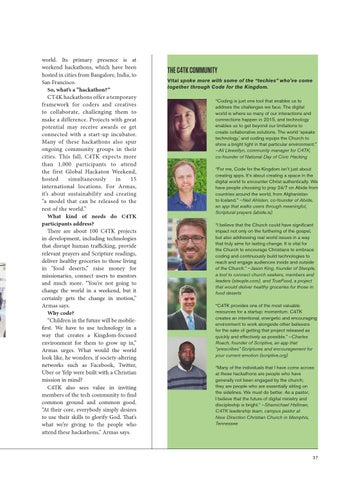 world. Its primary presence is at weekend hackathons, which have been hosted in cities from Bangalore, India, to San Francisco. So, what’s a “hackathon?” CT4K hackathons offer a temporary framework for coders and creatives to collaborate, challenging them to make a difference. Projects with great potential may receive awards or get connected with a start-up incubator. Many of these hackathons also spur ongoing community groups in their cities. This fall, C4TK expects more than 1,000 participants to attend the first Global Hackaton Weekend, hosted simultaneously in 15 international locations. For Armas, it’s about sustainability and creating “a model that can be released to the rest of the world.” What kind of needs do C4TK participants address? There are about 100 C4TK projects in development, including technologies that disrupt human trafficking, provide relevant prayers and Scripture readings, deliver healthy groceries to those living in “food deserts,” raise money for missionaries, connect users to mentors and much more. “You’re not going to change the world in a weekend, but it certainly gets the change in motion,” Armas says. Why code? “Children in the future will be mobilefirst. We have to use technology in a way that creates a Kingdom-focused environment for them to grow up in,” Armas urges. What would the world look like, he wonders, if society-altering networks such as Facebook, Twitter, Uber or Yelp were built with a Christian mission in mind? C4TK also sees value in inviting members of the tech community to find common ground and common good. “At their core, everybody simply desires to use their skills to glorify God. That’s what we’re giving to the people who attend these hackathons,” Armas says.

THE C4TK COMMUNITY Vital spoke more with some of the “techies” who’ve come together through Code for the Kingdom. “Coding is just one tool that enables us to address the challenges we face. The digital world is where so many of our interactions and connections happen in 2015, and technology enables us to get beyond our limitations to create collaborative solutions. The world ‘speaks technology,’ and coding equips the Church to shine a bright light in that particular environment.” –Ali Llewellyn, community manager for C4TK, co-founder of National Day of Civic Hacking “For me, Code for the Kingdom isn’t just about creating apps. It’s about creating a space in the digital world to encounter Christ authentically. We have people choosing to pray 24/7 on Abide from countries around the world, from Afghanistan to Iceland.” –Neil Ahlsten, co-founder of Abide, an app that walks users through meaningful, Scriptural prayers (abide.is) “I believe that the Church could have significant impact not only on the furthering of the gospel, but also addressing real world issues in a way that truly aims for lasting change. It is vital for the Church to encourage Christians to embrace coding and continuously build technologies to reach and engage audiences inside and outside of the Church.” –Jason King, founder of Steople, a tool to connect church seekers, members and leaders (steople.com), and TrueFood, a project that would deliver healthy groceries for those in food deserts “C4TK provides one of the most valuable resources for a startup: momentum. C4TK creates an intentional, energetic and encouraging environment to work alongside other believers for the sake of getting that project released as quickly and effectively as possible.” –Charles Roach, founder of Scriptive, an app that “prescribes” Scriptures and encouragement for your current emotion (scriptive.org) “Many of the individuals that I have come across at these hackathons are people who have generally not been engaged by the church; they are people who are essentially sitting on the sidelines. We must do better. As a pastor, I believe that the future of digital ministry and discipleship is bright.” –Shamichael Hallman, C4TK leadership team, campus pastor at New Direction Christian Church in Memphis, Tennessee