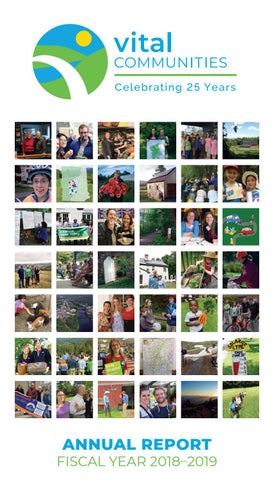 Dear Friends, Our 25th anniversary has provided a chance to both reflect and to refine our thinking about the years to come. Throughout the year, we’ve continued to make positive impacts in the Upper Valley in all our program areas. We also closed our fiscal year (July 2018-June 2019) on target.

Vital Communities cultivates the civic, environmental, and economic vitality of the Upper Valley. We bring people together, bridging boundaries and engaging our whole community to create positive change.

All of this is possible because of you—our donors, partners, volunteers, and community members. You and your neighbors are the driving force to get this work done. With guidance from our small staff, thousands of Upper Valley residents are actively working to strengthen our communities—helping improve home energy efficiency, connecting Upper Valley school kids with local farms and food, engaging towns and businesses in planning for our region’s housing needs, and so much more. You make it all happen. Your financial support enables Vital Communities staff to develop and implement innovative strategies for a stronger Upper Valley. This work is possible thanks to the many individuals, businesses, foundations, and municipalities that make financial contributions to ensure we’re here to serve the region. We can’t thank you enough. Vital Communities cultivates the civic, environmental, and economic vitality of the Upper Valley. We bring people together, bridging boundaries and engaging our whole community to create positive change. This approach has been core to Vital Communities since the beginning and remains the key to our success. We’re so grateful for your trust, your support, and your participation. With thanks, Tom Roberts Ron Shaiko Executive Director Chair, Board of Directors

INNOVATOR: someone who introduces new methods, ideas, or products.

ENTREPRENEUR: someone who organizes a business, taking on greater than normal risks to do so.

VISIONARY: someone who is thinking about and planning the future with imagination and wisdom.

Delia Clark is an innovator, an entrepreneur, and a visionary. Working with Betty Porter and a small group of like-minded Upper Valley residents, Delia was one of the founders and the first Executive Director of Vital Communities. Her influence is still evident in the organization’s work every day. Delia is responsible for defining Vital Communities’ approach—an approach rooted in a deep understanding of place, in thoughtfully convened and facilitated educational sessions that fostered careful listening, and in nurturing the social capital gained in this process to promote action by stronger and more resilient communities. Vital Communities began in the work of the local League of Women Voters. Concerned with the number of uncontested elections in the Upper Valley, they convened issue forums where residents could ask questions about key issues and hear from local experts. A successful community visioning session in Enfield, supported by then Valley News publisher Walter Paine and led by New Hampshire Extension Service facilitators, served as inspiration for the next steps. Might these kinds of sessions engage neighbors and voters to participate more in the civic life of their communities? Delia and Betty were inspired to create a local organization that would continue to listen, envision, and take action for positive change. 4

Delia, Betty, and many of the other founders of Vital Communities have been part of our 25th Anniversary reflections, helping us consider how our work needs to evolve as we head deeper into the 21st century. Delia believes that one of the reasons Vital Communities has been a successful incubator is because the Upper Valley has such an abundance of human talent and energy. This creative abundance has allowed us to test and refine community organizing tools that have spread throughout the region and beyond. In her career after leaving Vital Communities, Delia has continued to facilitate community visioning processes across the nation and internationally—leading to tremendous action, resilience, and growth of social capital.

“Our goal was that Vital Communities would become a trusted convener of community conversations that led to action and continued engagement on the issues. We believed then, and continue to believe, that this approach helps build social capital and makes community-grounded positive change more likely,” says Delia. “This creates stronger and more resilient communities that are better able to respond to the challenges and opportunities of both today and tomorrow.” 5

Lisa Cashdan & Peter Stein “Philanthropy should be social risk capital, and you need a place to try things out.” 

Lisa Cashdan and Peter Stein came to call the Upper Valley home nearly 30 years ago. After more than a decade as founding staff at the Trust for Public Land, they were ready to move out of New York City to raise their young family in a rural setting and close community. Peter took a job with Lyme Timber, while Lisa worked remotely for the Trust and eventually became an important figure in Upper Valley philanthropy through roles with the Upper Valley Community Foundation and the Vermont Community Foundation. “We have a long history of commitment to community, but I don’t think we could have even imagined how strong the community orientation in this region would be,” Lisa says. “The Upper Valley is rich with people caring.” When the work that became Vital Communities got its start within the League of Women Voters of Hanover 25 years ago, it was natural that Lisa and Peter became immediately and deeply involved. Between the two, over the decades, they’ve served on Vital Communities’ Board of Directors, Advisory Council, Nominating Committee, and steering committees focused on local economy, workforce housing, energy, food and farms, and more. They were integral to the process of creating a Community Profile for Norwich—part of the early regional research that helped define Vital Communities’ direction and approach—and two decades later participated in a process that shaped Vital Communities’ current strategic plan. They’ve also been committed donors, making annual financial contributions to Vital Communities for the past 25 years. “Vital Communities continues to show that it plays a valuable role in the Upper Valley,” Peter says. “It creates the space for people with different voices to come together in a safe way for the benefit of the Upper Valley. Philanthropy should be social risk capital, and you need a place to try things out. I see that as a really cool role that Vital Communities plays.”

Lynne LaBombard It was a fluke that Lynne LaBombard got involved with Vital Communities 15 years ago. Her colleague was supposed to present a rental housing market update at a breakfast hosted by the Upper Valley Housing Coalition, then part of Vital Communities. But an emergency forced Lynne to jump in at the last moment. All these years later, Lynne is still a fixture at the semiannual Business Leaders Housing Breakfast. In the past two years, Lynne has also volunteered her time to develop and teach Vital Communities’ newly accredited Green Real Estate Crash Course alongside Sarah Brock from Vital Communities. Thanks to Lynne’s expertise, the new course from Vital Communities provides a practical, manageable dive into the relevant issues and resources in the Upper Valley. “The average agent can leave this class and if they have an appointment to list a ‘green’ property that afternoon, they’re going to be better equipped to successfully manage and properly market that listing,” she says. Teaching is Lynne’s third career. She worked as a critical care nurse after relocating to the Upper Valley in 1983 and then spent more than three decades as a Realtor in the region. For the past 10 years, she’s taught real estate seminars and continuing-education courses. “I’ve got 35 years’ experience doing one thing, and I feel that I have a duty to give back to my community and my profession,” Lynne says. One benefit of volunteering around housing issues for such a sustained length of time: Lynne has seen change actually taking root. “It took more than a decade educating communities and leaders, but now that I can see the words ‘workforce housing’ contained in every article I read about new development proposals, I’m thrilled,” she says. And she thinks we’ll see the same thing with green real estate. “We’re just hitting it from the practitioners’ level now,” she says. “We’re going to close that gap.”

“There is no other organization like Vital Communities serving this region that works across issues, brings people together, and raises up the important issues to focus on,” Lisa says. “Vital Communities will continue to be vital to the Upper Valley.” 6

on healthy local fruits and vegetables

FUND FOR THE FUTURE The next 25 years will be full of change—and Vital Communities is committed to listening to the needs of the Upper Valley and bringing people together to meet them. Help us be responsive to the challenges of tomorrow with a gift to our 25th Anniversary Fund for the Future! The Fund will allow Vital Communities to create bold new projects, initiatives, and programs to address emerging issues—and all gifts will be MATCHED, up to $50,000! Use the enclosed envelope or visit vitalcommunities.org/donate to make your gift.

The financial information above does not include the activity of certain fiscal sponsorship arrangements entered into by Vital Communities or the change in value of the endowment fund held at the New Hampshire Charitable Foundation. Total revenues, gains, and other support is $1,215,286, and total expenses are $1,402,389.