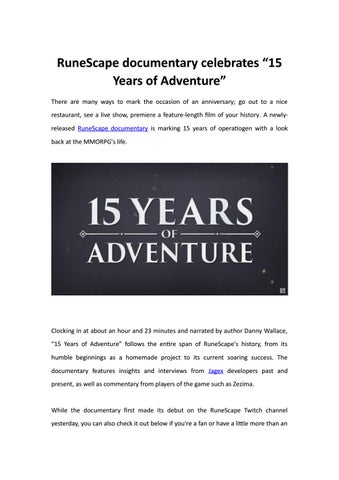 RuneScape documentary celebrates “15 Years of Adventure” There are many ways to mark the occasion of an anniversary; go out to a nice restaurant, see a live show, premiere a feature-length film of your history. A newlyreleased RuneScape documentary is marking 15 years of operatiogen with a look back at the MMORPG's life.

Clocking in at about an hour and 23 minutes and narrated by author Danny Wallace, “15 Years of Adventure” follows the entire span of RuneScape's history, from its humble beginnings as a homemade project to its current soaring success. The documentary features insights and interviews from Jagex developers past and present, as well as commentary from players of the game such as Zezima.

While the documentary first made its debut on the RuneScape Twitch channel yesterday, you can also check it out below if you're a fan or have a little more than an

â&#x20AC;&#x153;Narrated by Danny Wallace, RuneScape: 15 Years of Adventure explores the origins of the game, through to its explosive growth in the early noughties and into a brand that has today generated more than $750,000,000 and welcomed over 250,000,000 players to its world of adventurous fantasy since 2001,â&#x20AC;? says the official blurb.

With these words, a fascinating look into RuneScape's 15-year history begins in a brand-new documentary from Jagex. The studio notes that whether or not you've heard of the game, someone has, as RuneScape has garnered six Guinness world records and over 240 million accounts created. The documentary has interviews with a bunch of industry folk and other key figures from the game. Even Zezima, the most famous RuneScape player in the world, makes an appearance. Have a watch above.

Six Guinness World Records and over 240 million created accounts are definitely the sorts of things that many MMORPGs can only ever dream of, and are feats that would certainly necessitate the creation of a documentary to celebrate! Whether you're a fan of RuneScape or not, this documentary is a fascinating look back at one of the genre's elder statesmen and absolutely is worth the watch if you've got the time. If you want to hear more stories about RuneScape, there is a new documentary that is free to watch on YouTube, charting the MMO's highs and...

If you want to hear more stories about RuneScape, there is a new documentary that is free to watch on YouTube, charting the MMO's highs and...