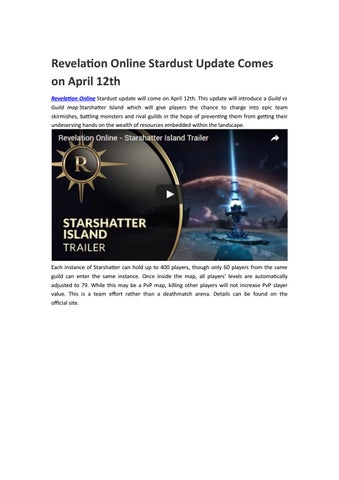 Revelation Online Stardust Update Comes on April 12th Revelation Online Stardust update will come on April 12th. This update will introduce a Guild vs Guild map Starshatter Island which will give players the chance to charge into epic team skirmishes, battling monsters and rival guilds in the hope of preventing them from getting their undeserving hands on the wealth of resources embedded within the landscape.

Each instance of Starshatter can hold up to 400 players, though only 60 players from the same guild can enter the same instance. Once inside the map, all players&#39; levels are automatically adjusted to 79. While this may be a PvP map, killing other players will not increase PvP slayer value. This is a team effort rather than a deathmatch arena. Details can be found on the official site.

New game trailer for upcoming Guild vs Guild map Global publisher My.com and developer NetEase proudly announce that the major game update, Stardust, will be landing in Revelation Online on April 12. This massive patch introduces players to the new Guild vs Guild map Starshatter Island, the long-awaited Faerieâ&amp;#x20AC;&amp;#x2122;s Funland map, localization refinements, and various gameplay improvements based on community feedback. Starshatter Island is a Guild vs Guild area in which they battle over the control of four precious crystal mining points. Players will fight vicious monsters and coordinate large scale attacks on rivaling guilds in order to gain the upper hand and mine the crystalsâ&amp;#x20AC;&amp;#x2122; resources. Starshatter Island lets multiple guilds, with a maximum of 400 players in total, unleash strategic conflicts of epic proportions!

Read more on this site: https://www.virsale.com/news/Revelation%20Online/Revelation-Online-Stardust-Update-Comes-