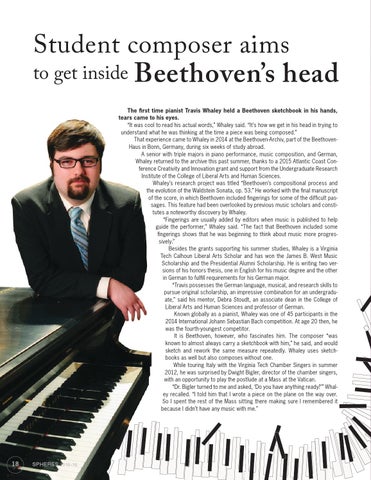 Student composer aims to get inside Beethoven’s

The first time pianist Travis Whaley held a Beethoven sketchbook in his hands, tears came to his eyes. “It was cool to read his actual words,” Whaley said. “It’s how we get in his head in trying to understand what he was thinking at the time a piece was being composed.” That experience came to Whaley in 2014 at the Beethoven-Archiv, part of the BeethovenHaus in Bonn, Germany, during six weeks of study abroad. A senior with triple majors in piano performance, music composition, and German, Whaley returned to the archive this past summer, thanks to a 2015 Atlantic Coast Conference Creativity and Innovation grant and support from the Undergraduate Research Institute of the College of Liberal Arts and Human Sciences. Whaley’s research project was titled “Beethoven’s compositional process and the evolution of the Waldstein Sonata, op. 53.” He worked with the final manuscript of the score, in which Beethoven included fingerings for some of the difficult passages. This feature had been overlooked by previous music scholars and constitutes a noteworthy discovery by Whaley. “Fingerings are usually added by editors when music is published to help guide the performer,” Whaley said. “The fact that Beethoven included some fingerings shows that he was beginning to think about music more progressively.” Besides the grants supporting his summer studies, Whaley is a Virginia Tech Calhoun Liberal Arts Scholar and has won the James B. West Music Scholarship and the Presidential Alumni Scholarship. He is writing two versions of his honors thesis, one in English for his music degree and the other in German to fulfill requirements for his German major. “Travis possesses the German language, musical, and research skills to pursue original scholarship, an impressive combination for an undergraduate,” said his mentor, Debra Stoudt, an associate dean in the College of Liberal Arts and Human Sciences and professor of German. Known globally as a pianist, Whaley was one of 45 participants in the 2014 International Johann Sebastian Bach competition. At age 20 then, he was the fourth-youngest competitor. It is Beethoven, however, who fascinates him. The composer “was known to almost always carry a sketchbook with him,” he said, and would sketch and rework the same measure repeatedly. Whaley uses sketchbooks as well but also composes without one. While touring Italy with the Virginia Tech Chamber Singers in summer 2012, he was surprised by Dwight Bigler, director of the chamber singers, with an opportunity to play the postlude at a Mass at the Vatican. “Dr. Bigler turned to me and asked, ‘Do you have anything ready?’” Whaley recalled. “I told him that I wrote a piece on the plane on the way over. So I spent the rest of the Mass sitting there making sure I remembered it because I didn’t have any music with me.”

Spheres is the annual magazine of the College of Liberal Arts and Human Sciences. Learn more at http://www.clahs.vt.edu/index.html. 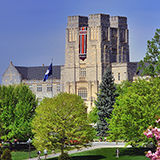