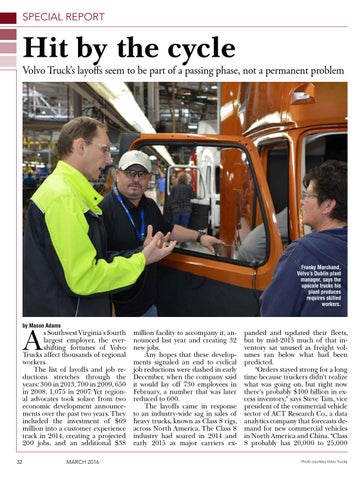 Hit by the cycle

Volvo Truck’s layoffs seem to be part of a passing phase, not a permanent problem

s Southwest Virginia’s fourth largest employer, the evershifting fortunes of Volvo Trucks affect thousands of regional workers. The list of layoffs and job reductions stretches through the years: 300 in 2013, 700 in 2009, 650 in 2008, 1,075 in 2007. Yet regional advocates took solace from two economic development announcements over the past two years. They included the investment of $69 million into a customer experience track in 2014, creating a projected 200 jobs, and an additional $38

million facility to accompany it, announced last year and creating 32 new jobs. Any hopes that these developments signaled an end to cyclical job reductions were dashed in early December, when the company said it would lay off 730 employees in February, a number that was later reduced to 600. The layoffs came in response to an industry-wide sag in sales of heavy trucks, known as Class 8 rigs, across North America. The Class 8 industry had soared in 2014 and early 2015 as major carriers ex-

panded and updated their fleets, but by mid-2015 much of that inventory sat unused as freight volumes ran below what had been predicted. “Orders stayed strong for a long time because truckers didn’t realize what was going on, but right now there’s probably $100 billion in excess inventory,” says Steve Tam, vice president of the commercial vehicle sector of ACT Research Co., a data analytics company that forecasts demand for new commercial vehicles in North America and China. “Class 8 probably has 20,000 to 25,000 Photo courtesy Volvo Trucks