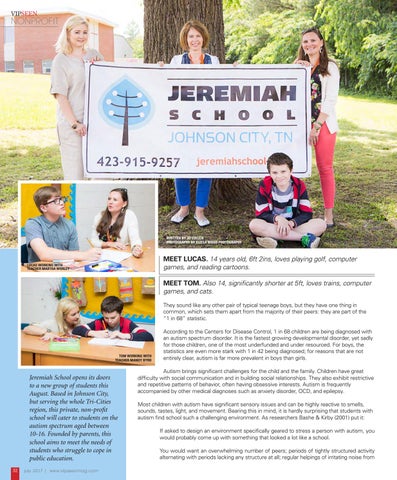 MEET TOM. Also 14, significantly shorter at 5ft, loves trains, computer games, and cats. They sound like any other pair of typical teenage boys, but they have one thing in common, which sets them apart from the majority of their peers: they are part of the â&#x20AC;&#x153;1 in 68â&#x20AC;? statistic.

Jeremiah School opens its doors to a new group of students this August. Based in Johnson City, but serving the whole Tri-Cities region, this private, non-profit school will cater to students on the autism spectrum aged between 10-16. Founded by parents, this school aims to meet the needs of students who struggle to cope in public education. 32

According to the Centers for Disease Control, 1 in 68 children are being diagnosed with an autism spectrum disorder. It is the fastest growing developmental disorder, yet sadly for those children, one of the most underfunded and under resourced. For boys, the statistics are even more stark with 1 in 42 being diagnosed; for reasons that are not entirely clear, autism is far more prevalent in boys than girls.

Autism brings significant challenges for the child and the family. Children have great difficulty with social communication and in building social relationships. They also exhibit restrictive and repetitive patterns of behavior, often having obsessive interests. Autism is frequently accompanied by other medical diagnoses such as anxiety disorder, OCD, and epilepsy. Most children with autism have significant sensory issues and can be highly reactive to smells, sounds, tastes, light, and movement. Bearing this in mind, it is hardly surprising that students with autism find school such a challenging environment. As researchers Bashe & Kirby (2001) put it: If asked to design an environment specifically geared to stress a person with autism, you would probably come up with something that looked a lot like a school. You would want an overwhelming number of peers; periods of tightly structured activity alternating with periods lacking any structure at all; regular helpings of irritating noise from 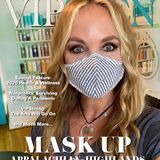