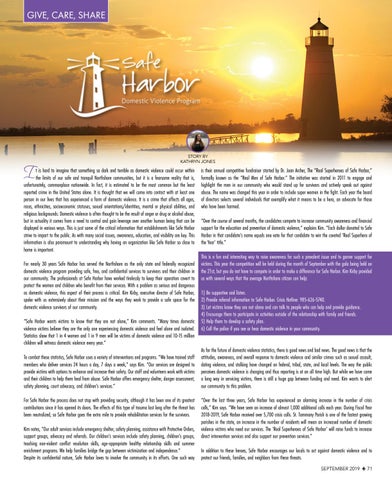 t is hard to imagine that something so dark and terrible as domestic violence could occur within the limits of our safe and tranquil Northshore communities, but it is a fearsome reality that is, unfortunately, commonplace nationwide. In fact, it is estimated to be the most common but the least reported crime in the United States alone. It is thought that we will come into contact with at least one person in our lives that has experienced a form of domestic violence. It is a crime that affects all ages, races, ethnicities, socioeconomic statuses, sexual orientations/identities, mental or physical abilities, and religious backgrounds. Domestic violence is often thought to be the result of anger or drug or alcohol abuse, but in actuality it comes from a need to control and gain leverage over another human being that can be displayed in various ways. This is just some of the critical information that establishments like Safe Harbor strive to impart to the public. As with many social issues, awareness, education, and visibility are key. This information is also paramount to understanding why having an organization like Safe Harbor so close to home is important. For nearly 30 years Safe Harbor has served the Northshore as the only state and federally recognized domestic violence program providing safe, free, and confidential services to survivors and their children in our community. The professionals at Safe Harbor have worked tirelessly to keep their operation covert to protect the women and children who benefit from their services. With a problem as serious and dangerous as domestic violence, this aspect of their process is critical. Kim Kirby, executive director of Safe Harbor, spoke with us extensively about their mission and the ways they work to provide a safe space for the domestic violence survivors of our community. “Safe Harbor wants victims to know that they are not alone,” Kim comments. “Many times domestic violence victims believe they are the only one experiencing domestic violence and feel alone and isolated. Statistics show that 1 in 4 women and 1 in 9 men will be victims of domestic violence and 10-15 million children will witness domestic violence every year.” To combat these statistics, Safe Harbor uses a variety of interventions and programs. “We have trained staff members who deliver services 24 hours a day, 7 days a week,” says Kim. “Our services are designed to provide victims with options to enhance and increase their safety. Our staff and volunteers work with victims and their children to help them heal from abuse. Safe Harbor offers emergency shelter, danger assessment, safety planning, court advocacy, and children’s services.” For Safe Harbor the process does not stop with providing security, although it has been one of its greatest contributions since it has opened its doors. The effects of this type of trauma last long after the threat has been neutralized, so Safe Harbor goes the extra mile to provide rehabilitation services for the survivors. Kim notes, “Our adult services include emergency shelter, safety planning, assistance with Protective Orders, support groups, advocacy and referrals. Our children’s services include safety planning, children’s groups, teaching non-violent conflict resolution skills, age-appropriate healthy relationship skills and summer enrichment programs. We help families bridge the gap between victimization and independence.” Despite its confidential nature, Safe Harbor loves to involve the community in its efforts. One such way

is their annual competitive fundraiser started by Dr. Joan Archer, The “Real Superheroes of Safe Harbor,” formally known as the “Real Men of Safe Harbor.” The initiative was started in 2011 to engage and highlight the men in our community who would stand up for survivors and actively speak out against abuse. The name was changed this year in order to include super women in the fight. Each year the board of directors selects several individuals that exemplify what it means to be a hero, an advocate for those who have been harmed. “Over the course of several months, the candidates compete to increase community awareness and financial support for the education and prevention of domestic violence,” explains Kim. “Each dollar donated to Safe Harbor in that candidate’s name equals one vote for that candidate to win the coveted ‘Real Superhero of the Year’ title.” This is a fun and interesting way to raise awareness for such a prevalent issue and to garner support for victims. This year the competition will be held during the month of September with the gala being held on the 21st, but you do not have to compete in order to make a difference for Safe Harbor. Kim Kirby provided us with several ways that the average Northshore citizen can help: 1) Be supportive and listen. 2) Provide referral information to Safe Harbor. Crisis Hotline: 985-626-5740. 3) Let victims know they are not alone and can talk to people who can help and provide guidance. 4) Encourage them to participate in activities outside of the relationship with family and friends. 5) Help them to develop a safety plan. 6) Call the police if you see or hear domestic violence in your community. As for the future of domestic violence statistics, there is good news and bad news. The good news is that the attitudes, awareness, and overall response to domestic violence and similar crimes such as sexual assault, dating violence, and stalking have changed on federal, tribal, state, and local levels. The way the public perceives domestic violence is changing and thus reporting is at an all time high. But while we have come a long way in servicing victims, there is still a huge gap between funding and need. Kim wants to alert our community to this problem. “Over the last three years, Safe Harbor has experienced an alarming increase in the number of crisis calls,” Kim says. “We have seen an increase of almost 1,000 additional calls each year. During Fiscal Year 2018-2019, Safe Harbor received over 5,700 crisis calls. St. Tammany Parish is one of the fastest growing parishes in the state, an increase in the number of residents will mean an increased number of domestic violence victims who need our services. The ‘Real Superheroes of Safe Harbor’ will raise funds to increase direct intervention services and also support our prevention services.” In addition to these heroes, Safe Harbor encourages our locals to act against domestic violence and to protect our friends, families, and neighbors from these threats. SEPTEMBER 2019 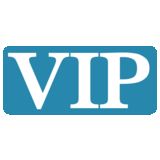