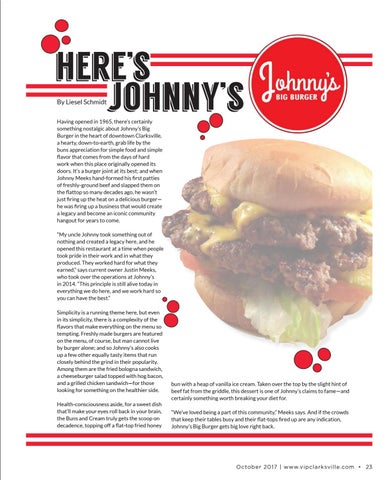 Having opened in 1965, there’s certainly something nostalgic about Johnny’s Big Burger in the heart of downtown Clarksville, a hearty, down-to-earth, grab life by the buns appreciation for simple food and simple flavor that comes from the days of hard work when this place originally opened its doors. It’s a burger joint at its best; and when Johnny Meeks hand-formed his first patties of freshly-ground beef and slapped them on the flattop so many decades ago, he wasn’t just firing up the heat on a delicious burger— he was firing up a business that would create a legacy and become an iconic community hangout for years to come. “My uncle Johnny took something out of nothing and created a legacy here, and he opened this restaurant at a time when people took pride in their work and in what they produced. They worked hard for what they earned,” says current owner Justin Meeks, who took over the operations at Johnny’s in 2014. “This principle is still alive today in everything we do here, and we work hard so you can have the best.” Simplicity is a running theme here, but even in its simplicity, there is a complexity of the flavors that make everything on the menu so tempting. Freshly made burgers are featured on the menu, of course, but man cannot live by burger alone; and so Johnny’s also cooks up a few other equally tasty items that run closely behind the grind in their popularity. Among them are the fried bologna sandwich, a cheeseburger salad topped with hog bacon, and a grilled chicken sandwich—for those looking for something on the healthier side. Health-consciousness aside, for a sweet dish that’ll make your eyes roll back in your brain, the Buns and Cream truly gets the scoop on decadence, topping off a flat-top fried honey

bun with a heap of vanilla ice cream. Taken over the top by the slight hint of beef fat from the griddle, this dessert is one of Johnny’s claims to fame—and certainly something worth breaking your diet for. “We’ve loved being a part of this community,” Meeks says. And if the crowds that keep their tables busy and their flat-tops fired up are any indication, Johnny’s Big Burger gets big love right back. 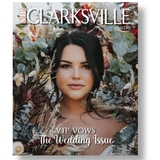