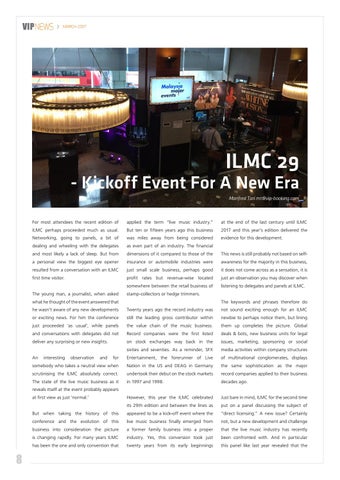 For most attendees the recent edition of

at the end of the last century until ILMC

ILMC perhaps proceeded much as usual.

But ten or fifteen years ago this business

2017 and this year’s edition delivered the

Networking, going to panels, a bit of

was miles away from being considered

evidence for this development.

dealing and wheeling with the delegates

as even part of an industry. The financial

and most likely a lack of sleep. But from

dimensions of it compared to those of the

This news is still probably not based on self-

insurance or automobile industries were

awareness for the majority in this business,

resulted from a conversation with an ILMC

it does not come across as a sensation, it is

just an observation you may discover when

somewhere between the retail business of

listening to delegates and panels at ILMC.

The young man, a journalist, when asked

what he thought of the event answered that

The keywords and phrases therefore do

he wasn’t aware of any new developments

Twenty years ago the record industry was

not sound exciting enough for an ILMC

or exciting news. For him the conference

still the leading gross contributor within

newbie to perhaps notice them, but lining

just proceeded ‘as usual’, while panels

the value chain of the music business.

them up completes the picture. Global

and conversations with delegates did not

Record companies were the first listed

deliver any surprising or new insights.

on stock exchanges way back in the

sixties and seventies. As a reminder, SFX

Entertainment, the forerunner of Live

somebody who takes a neutral view when

Nation in the US and DEAG in Germany

the same sophistication as the major

undertook their debut on the stock markets

record companies applied to their business

The state of the live music business as it

However, this year the ILMC celebrated

Just bare in mind, ILMC for the second time

its 29th edition and between the lines as

put on a panel discussing the subject of

But when taking the history of this

appeared to be a kick-off event where the

conference and the evolution of this

not, but a new development and challenge

business into consideration the picture

a former family business into a proper

that the live music industry has recently

is changing rapidly. For many years ILMC

been confronted with. And in particular

has been the one and only convention that

twenty years from its early beginnings

reveals itself at the event probably appears at first view as just ‘normal.’