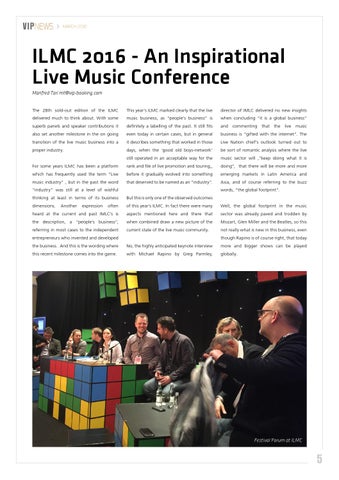 This year’s ILMC marked clearly that the live

delivered much to think about. With some

music business, as “people’s business” is

when concluding “it is a global business”

superb panels and speaker contributions it

definitely a labelling of the past. It still fits

and commenting that the live music

also set another milestone in the on going

even today in certain cases, but in general

business is “gifted with the internet”. The

transition of the live music business into a

it describes something that worked in those

days, when the ‘good old boys-network’

be sort of romantic analysis where the live

still operated in an acceptable way for the

music sector will ,”keep doing what it is

For some years ILMC has been a platform

rank and file of live promotion and touring,,

doing”, that there will be more and more

which has frequently used the term “Live

before it gradually evolved into something

emerging markets in Latin America and

music industry” , but in the past the word

that deserved to be named as an “industry”.

Asia, and of course referring to the buzz

“industry” was still at a level of wishful

But this is only one of the observed outcomes

of this year’s ILMC. In fact there were many

Well, the global footprint in the music

heard at the current and past IMLC’s is

aspects mentioned here and there that

sector was already paved and trodden by

the description, a “people’s business”,

when combined draw a new picture of the

Mozart, Glen Miller and the Beatles, so this

referring in most cases to the independent

not really what is new in this business, even

entrepreneurs who invented and developed

though Rapino is of course right, that today

the business. And this is the wording where

No, the highly anticipated keynote interview

more and bigger shows can be played

this recent milestone comes into the game.

with Michael Rapino by Greg Parmley,

VIP-News is a FREE online newsletter. VIP-News is emailed monthly to more than 20.000 Live Entertainment Industry Professionals all over t...

VIP-News is a FREE online newsletter. VIP-News is emailed monthly to more than 20.000 Live Entertainment Industry Professionals all over t...