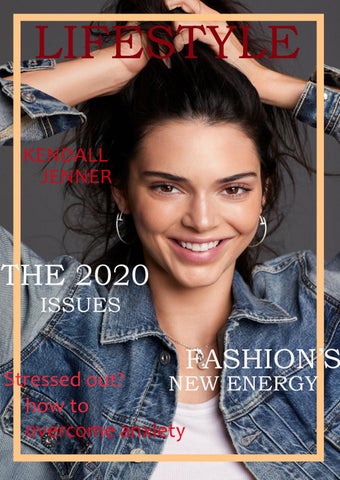 FASHION IS MORE THAN CLOTHES

WHAT IS FASHION? “Fashion, to me, represents life. When I wear something that makes me feel more…creative, more interesting, stronger, complicated — that’s when I feel the most alive, the most engaged with the world. Changing my wardrobe is the quickest route to feeling like everything is new again, that anything is possible. So the purpose of fashion is to make you feel alive and present. I hate it when people get too philosophical about fashion, but this really is the truth!”

Why is WW3 trending? Is World War 3 really happening? In the hours following the Pentagon’s announcement of Soleimani’s killing, ‘World War III’ started trending on Twitter. Millions have speculated the assassination of Soleimani could spark a war between the US and Iran. “If you are attempting to register or verify registration, please check back later today as we are working to resolve this issue. We appreciate your patience.” Also trending over the weekend included the phrase “Wag the Dog”, referring to the 1998 film of the same name. The film centres on a fictional president, who begins a phony war as a distraction technique. Critics of Mr Trump have levelled he is “wagging the dog”, using the assassination of Soleimani as an attempt to divert attention from his impeachment proceedings.

Presently, there has been no declarati Following the US airstrikes in Iraq, U Twitter to voice his views on the recen In one tweet on Saturday, Mr Trump sites in Iran if they decide to retaliate He said: “We have...targeted 52 Irania hostages taken by Iran many years ag tant to Iran & the Iranian culture, and BE HIT VERY FAST AND VERY HA “The USA wants no more threats!”

general Esmail Ghaani, who has taken Soleimani’s place as head of Iran’s Quds Force, has also stated Iran will be taking “actions” against the US as revenge for the death of Soleimani. Ghaani told Iranian state television on Monday: “God the almighty has promised to get his revenge, and God is the main avenger. Certainly, actions

ion of war between the US and Iran. US President Donald Trump took to nt US military action. said the US will target a number of against Friday’s events. an sites (representing the 52 American go), some at a very high level & impord those targets, and Iran itself, WILL ARD.

his actions and his rhetoric, that he military operations with Iran. Howevhe US took action to “stop a war”, not

Allies of both countries have already weighed in following Soleimani’s assassination, and Iran’s strategic ally Russia has condemned the US airstrike. However, US ally leaders including German Chancellor Angela Merkel and French President Emmanuel Macron have not supported the notion of a military conflict. Along with British Prime Minister Boris Johnson, the leaders instead released a statement detailing how the “cycle of violence” in the Middle East must end. And while Mr Johnson said we should not “lament” the death of Soleimani, he also called for

GET BACK TO BASICS With a minimalist style, you and your closet should have one main goal: get back to basics. Much like a capsule wardrobe, minimalist pieces might be basics for some, but the wardrobe workhorses for you. Think thick sweaters, straight-leg black jeans, crisp button-ups and ankle boots. THROW SHAPES TOGETHER When it comes to picking out silhouettes for your minimalist wardrobe, look to these main shapes: box cuts (perfect for tops and sweaters), shift and A-line (for dresses and skirts) and straight silhouettes (for your pants and jeans!.

MINIMALIST FASHION LOOK Minimalist fashion is defined by one major principle: keep it simple! Streamlined shapes, a small selection of colors and even a bare minimum (gasp!) amount of clothing in your closet. Simplicity is the key to pinpointing this style. Keep reading to learn more about minimalist style.

WHAT IS RETRO STYLE ? Retro style is a style that is imitative or consciously derivative of lifestyles, trends, or art forms from the historical past, including in music, modes, fashions, or attitudes. It may also be known as “vintage inspired”. ost commonly retro is used to describe objects and attitudes from the recent past that no longer seem modern. It suggests a fundamental shift in the way we relate to the past. Different from more traditional forms of revivalism, “retro” suggests a half ironic, half longing consideration of the recent past; it has been called an “unsentimental nostalgia”,[9] recalling modern forms that are no longer current. The concept of nostalgia is linked to retro, but the bittersweet desire for things, persons, and situations of the past has an ironic stance in retro style. Retro shows nostalgia with a dose of cynicism and detachment. [10] The desire to capture something from the past and evoke nostalgia is fuelled by dissatisfaction with the present.

Ultraviolet light also converts chole the risk of heart attacks and strokes. and have a diet rich in fresh, season many of us have a healthier diet in t

of year, scientists have proven that itâ&#x20AC;&#x2122;s D is synthesised by sunlight and is more summer. Vitamin D plays a protective tain cancers, and other chronic diseas-

esterol into Vitamin D, which reduces . Our tendency to drink more water nal fruit and vegetables also means that the summer months.

COLORFULL FASHION LOOK When it comes to wearing color, these five lovely ladies know how to pull it off without looking too over the top. You can’t help but smile when scrolling their Instagram feeds, and they are by far the most colorful bloggers who certainly make a statement and really stand out when it comes to wearing color. With spring and daylight savings quickly approaching, we are definitely in brighter spirits now that it’s time to put that puffy coat into storage (well in NYC...if you’re on the west coast you probably don’t even own a puffy coat lol).

HOW TO MIX COLORFUL SEPARATES WITHOUT LOOKINGLIKE A CLOWN ? It’s easy to play it safe when it comes to clothing. We’ve all been there, whether it is leaning heavily on white, black, or neutral shades for our fashion sense. But in our haste to just get ready for the daily grind, we’re neglecting a world of beautiful color at our disposal. Fortunately, there is a way to mix and match colorful separates that won’t have you looking like a clown’s extended family member, and instead brighten up your every day look.

EDGY FASHION LOOK What is edgy style clothing? To us, having edgy style means thinking ahead of the curve and wearing styles that are unique BUT wearable. Those with edge donâ&#x20AC;&#x2122;t follow trends; they sometimes even set them.

Prince Harry, Meghan Markle are moving to Canada: Here’s what we know On Monday, Queen Elizabeth confirmed that the cou-

ple wil be splitting their time between the U.K. and Canada as they’ve decided to step away from duties as official senior members of the Royal Family. Markle and Prince Harry said they want to be financial y independent, and “carve out a progressive new role” within the monarchy. “Although we would have preferred them to remain full-time working members of the Royal Family, we respect and understand their wish to live a more independent life as a family while remaining a valued part of my family,” the Queen said in a statement. Speaking with Global News on Monday, Prime Minister Justin Trudeau said at this point, there have been no conversations around the couple’s move to Canada. “There wil be many discussions to come on how that works,” he said.

“But there’s still a lot of decisions to be taken by the Royal Family and by the Sussexes themselves as to what level of engagement they choose to have and these are things that we are supportive of.” Trudeau said there have been no discussions around security and the impact on taxpayers yet. So when will the couple officially move to Canada and what will their lives here look like? Here’s everything we know so far. Ties to Canada Canada is a special place to both Markle and Prince Harry. While it is not yet clear where exactly they will be moving to, the Duke and Duchess of Sussex most recently spent Christ-

How To Dress Confidently - 4 T

Tips To Boost Your Confidence Accept the fact that you are not a supermodel - it’s OK to have short legs and 30% body fat. As long as you are taking care of your body, you should be proud of your figure. If you really want lean legs or big butt then work on it! I feel the most confident about my body after a workout, because I know I have worked hard for the body I have right now. Even though I have cellulite on my legs I feel confident in shorts. When you are confident with your shape, dress confidently will be much easier. A smile is the best accessory to any outfits. Remember to smile when you need a boost of confidence. Understand your body type and highlight your best feature. Drive all the attention to your favorite body part. For example, use a belt with huge buckles to emphasize your waistline or wear an off the shoulder top to highlight your neckline. You won’t feel confident in clothes you can’t be yourself. If you can’t walk normally in heels then don’t wear heels - you don’t need a certain kind of shoes to be sexy. If you hate belt bags hanging around your waist then wear a cross body bag - you don’t need to force any fashion trend on yourself to be stylish. If you just love the simple T-shirt and jeans combo then don’t put on a floral dress - you don’t need an outfit to make you interesting and beautiful. The key to dressing confidently is to feel comfortable in your clothes.

A Look at Kendall Jenner’s 10Year Style Evolution At the beginning of this decade Kendall Jenner went from learning to walk the runway to mastering it as one of today’s most sought-after models. Remember that 2011 “Keeping Up With the Kardashians” episode where Kim Kardashian was nearly forcing her then 15-yearold sister to walk for designer Sherri Hill? Well, the tables have certainly turned. Jenner is a catwalk mainstay now, working the runway for Burberry, Marc Jacobs, Alexander Wang, Versace and the list goes on. As she continues to build her resume working with top fashion houses, her own style has drastically changed. For instance, in 2010, Jenner was seen wearing leggy minidresses paired with brogues. Now, the model has found her fashion groove when it comes to both red carpet and street style. Off-duty, her shoe looks range from Dr. Marten boots to Birkenstocks, paired with jeans and hoodies. For major events, Jenner almost always goes for a heel. Lately, she has been a fan on FN’s 2019 Designer of the Year, Amina Muaddi. Jenner has stepped out in New York several times in her designs, wearing the Begum slingback pump and the Gilda crystal-covered strappy sandal Throughout the decade, Jenner has been spotted in the hottest ofthe-moment trends, too, from the see-through PVC heels and white boots to the current must-have square-toed shoe.