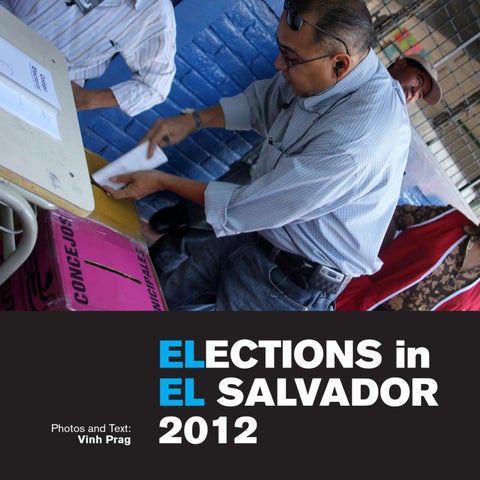 Copyright 漏 2012 All rights reserved by the author/photographer. ISBN: 978-9977-925-77-6 (Electronic version) Special thanks to Victor Valle and Julia Hoffmann.

For the people of El Salvador

Vinh Prag is a Danish-Vietnamese journalist and photographer who graduated from the Media, Peace and Conflict Studies MA programme at the University for Peace in 2012. He has traveled all his life and has studied at universities in Denmark, Vietnam, Canada and Costa Rica. 6

Free and democratic elections are a recent event in El Salvador. Through his lens, Vinh has captured the historic circumstances very well, from the martyr Archbishop Romero’s citation to the emblematic Rigoberta Menchú’s photo. Indeed, “Peace is generosity” and harmonious coexistence. Vinh has recorded such words with a superior photographic art and thoughtful paragraphs. He verifies how a former warriors’ society delivers “heartfelt smiles and an optimistic atmosphere” and, at the end, helps to build hope, democracy and peace. Elections in El Salvador 2012 is an excellent piece of artistic and academic work. Victor Valle Associate Vice Rector and Professor, University for Peace 7

THE MOST POWERFUL WEAPON OF FREE MEN IS THE VOTE.

This inspiring and seemingly democracy-promoting quotation is found on the basis of a large flagpole in San Salvador and seems to fit the current state of the country, especially on Election Day.

The sentence, though, is attributed to Roberto d’Aubuisson, the founder and first leader of the right-wing party ARENA, and the losing presidential candidate in the 1984 Salvadorean elections.

“Former [National Guard] Major Roberto d’Aubuisson gave the order to assassinate the Archbishop and gave precise instructions to members of his security service, acting as a “death squad”, to organize and supervise the assassination.”

During the civil war, he was a controversial right-wing leader who was widely believed to run ‘death squads’ that killed opposition members, including

The UN Truth Commission on El Salvador wrote on page 131 of their 1993 report:

D’Aubuisson died of cancer in 1992 at the age of 47. He was never tried for any of his alleged crimes. 9

The 11th of March 2012 was Election Day in El Salvador with 84 parliamentary seats and 262 mayorships to be elected. This was the first time since the reconciliation after the civil war that the right wing, dominated by the ARENA party, was in opposition, after the left-wing FMLN party won the elections in 2009. In a country where the second-longest civil war in Central America only ended two decades ago, and where gang wars, murder and other crimes are pervasive elements of daily life, a visitor is surprised by the heartfelt smiles and optimistic atmosphere that greets you, and even more so on Election Day where Salvadoreans celebrate their democracy. I took part in an International Election Observation Mission from the UN mandated University for Peace in Costa Rica, a nearby neighbour of El Salvadorâ&amp;#x20AC;&amp;#x2122;s with a very different history. During Election Day, I visited several voting centres in and around San Salvador. Enjoy, Vinh Prag.

PREPARATION It is early morning in the capital San Salvador, and young supporters of the FMLN party sit in a truck outside one of the voting centres, waiting for the elections to officially begin.

Elementary schools around San Salvador are preparing for the big day. Meters after meters of lists of local voters cover the outside walls of the schools, and the first citizens are starting to show up to find their names.

The last steps of preparation before the voters arrive. Two monitors from the rivalling parties ARENA and FMLN cooperate with setting up the candidate lists on the official cardboard holders sent to the voting centres by the TSE, the Supreme Electoral Tribunal. Two policemen await the voters alongside two tired helpers who have been setting up the voting centre since very early in the morning. 13

Voters can look up their names on the voter lists hanging on the outside wall of the voting centres. These are two of several boards holding the popular name Rodriguez. 15

It does not take long to realise that one party in particular has a much larger budget for advertisement than all the others. From billboards and bus stops in the urban landscape over enthusiastic supporters hanging off pickup trucks to flags and banners in slum areas and rich neighbourhoods alike, the red logo of the FMLN party is to be seen everywhere.

In any wellfunctioning democracy, vandalism on election posters occurs.

The parties have no problem sharing advertising space.

Several parties cross out their own names on their posters to encourage voters to vote for them by crossing out the party on the ballots.

A long line forms in front of the school, filled with Salvadoreans eager to vote early and get on with their Sunday plans. As they enter the voting centre, both male and female police personnel welcome the voters with a pat-down and a look through their bags. El Salvador not only has a history of political violence and civil war but also, even today, one of the highest murder rates in the world. 22

El Salvador has a literacy rate of between 81% and 84%. The 2012 elections is the first time in the history of Salvadorean democracy that the voters can see on the ballots what the candidates actually look like. Some politicians joke that they have no chance this year when they have to compete against more physically attractive opponents.

Official cardboard voting booths are distributed by the TSE to all voting centres. 24

As in many other countries, the voters in El Salvador dip one of their fingers in ink when they have finished the voting procedure. This way the officials can see if someone tries to vote more than once.

Father ToĂąo is a Catholic priest in one of San Salvadorâ&amp;#x20AC;&amp;#x2122;s rough neighbourhoods and works with reformed gang members. He does not trust that the politicians will bring the change that El Salvador needs but he still believes in the importance of voting. 27

Each voting station has a team of volunteer officials who are supporters of different political parties. During Election Day, both the officials and the monitors wearing vests with logos of different parties seem to get along quite well.

At the end of the day, the official gathering of all the votes happens at the Crowne Plaza Hotel in San Salvador. The press reports on the progress from the colourful carpet until the last vote is counted.

Rigoberta MenchĂş, the 1992 Nobel Peace Prize laureate from Guatemala, made a special visit to the Crowne Plaza during the final counting of the votes. 32

Quijano, kept his position as the mayor of the capital city. In the legislative elections, ARENA also came out as the big winner. Going from 18 seats to 33 (out of 84), they now had more seats than FMLN (31) for the first time since 2003. The break-off right-wing party GANA held on to 11 seats. No party won an absolute majority which opens up for different coalitions. The right wing can form a majority to pass laws but FMLN can also unite with GANA and some of the smaller parties to overrule any legislation ARENA suggests. 33 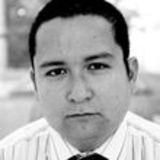