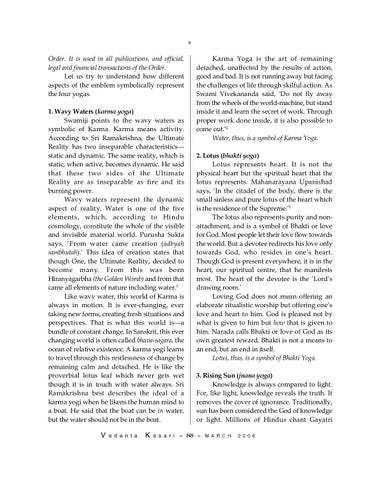 Order. It is used in all publications, and official, legal and financial transactions of the Order. Let us try to understand how different aspects of the emblem symbolically represent the four yogas. 1. Wavy Waters (karma yoga) Swamiji points to the wavy waters as symbolic of Karma. Karma means activity. According to Sri Ramakrishna, the Ultimate Reality has two inseparable characteristics static and dynamic. The same reality, which is static, when active, becomes dynamic. He said that these two sides of the Ultimate Reality are as inseparable as fire and its burning power. Wavy waters represent the dynamic aspect of reality. Water is one of the five elements, which, according to Hindu cosmology, constitute the whole of the visible and invisible material world. Purusha Sukta says, From water came creation (adbyah sambhutah). This idea of creation states that though One, the Ultimate Reality, decided to become many. From this was born Hiranyagarbha (the Golden Womb) and from that came all elements of nature including water.3 Like wavy water, this world of Karma is always in motion. It is ever-changing, ever taking new forms, creating fresh situations and perspectives. That is what this world isa bundle of constant change. In Sanskrit, this ever changing world is often called bhava-sagara, the ocean of relative existence. A karma yogi learns to travel through this restlessness of change by remaining calm and detached. He is like the proverbial lotus leaf which never gets wet though it is in touch with water always. Sri Ramakrishna best describes the ideal of a karma yogi when he likens the human mind to a boat. He said that the boat can be in water, but the water should not be in the boat.

Karma Yoga is the art of remaining detached, unaffected by the results of action, good and bad. It is not running away but facing the challenges of life through skilful action. As Swami Vivekananda said, Do not fly away from the wheels of the world-machine, but stand inside it and learn the secret of work. Through proper work done inside, it is also possible to come out.4 Water, thus, is a symbol of Karma Yoga. 2. Lotus (bhakti yoga) Lotus represents heart. It is not the physical heart but the spiritual heart that the lotus represents. Mahanarayana Upanishad says, In the citadel of the body, there is the small sinless and pure lotus of the heart which is the residence of the Supreme.5 The lotus also represents purity and nonattachment, and is a symbol of Bhakti or love for God. Most people let their love flow towards the world. But a devotee redirects his love only towards God, who resides in ones heart. Though God is present everywhere, it is in the heart, our spiritual centre, that he manifests most. The heart of the devotee is the Lords drawing room. Loving God does not mean offering an elaborate ritualistic worship but offering ones love and heart to him. God is pleased not by what is given to him but how that is given to him. Narada calls Bhakti or love of God as its own greatest reward. Bhakti is not a means to an end, but an end in itself. Lotus, thus, is a symbol of Bhakti Yoga. 3. Rising Sun (jnana yoga) Knowledge is always compared to light. For, like light, knowledge reveals the truth. It removes the cover of ignorance. Traditionally, sun has been considered the God of knowledge or light. Millions of Hindus chant Gayatri 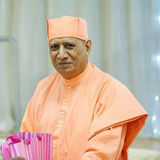