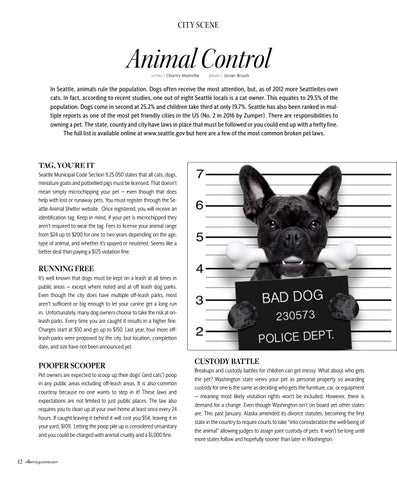 In Seattle, animals rule the population. Dogs often receive the most attention, but, as of 2012 more Seattleites own cats. In fact, according to recent studies, one out of eight Seattle locals is a cat owner. This equates to 29.5% of the population. Dogs come in second at 25.2% and children take third at only 19.7%. Seattle has also been ranked in multiple reports as one of the most pet friendly cities in the US (No. 2 in 2016 by Zumper). There are responsibilities to owning a pet. The state, county and city have laws in place that must be followed or you could end up with a hefty fine. The full list is available online at www.seattle.gov but here are a few of the most common broken pet laws.

TAG, YOU&#39;RE IT Seattle Municipal Code Section 9.25.050 states that all cats, dogs, miniature goats and potbellied pigs must be licensed. That doesn’t mean simply microchipping your pet — even though that does help with lost or runaway pets. You must register through the Seattle Animal Shelter website. Once registered, you will receive an identification tag. Keep in mind, if your pet is microchipped they aren’t required to wear the tag. Fees to license your animal range from $24 up to $200 for one to two years depending on the age, type of animal, and whether it’s spayed or neutered. Seems like a better deal than paying a $125 violation fine.

RUNNING FREE It’s well known that dogs must be kept on a leash at all times in public areas — except where noted and at off leash dog parks. Even though the city does have multiple off-leash parks, most aren’t sufficient or big enough to let your canine get a long run in. Unfortunately, many dog owners choose to take the risk at onleash parks. Every time you are caught it results in a higher fine. Charges start at $50 and go up to $150. Last year, four more offleash parks were proposed by the city, but location, completion date, and size have not been announced yet.

POOPER SCOOPER Pet owners are expected to scoop up their dogs’ (and cats’) poop in any public areas including off-leash areas. It is also common courtesy because no one wants to step in it! These laws and expectations are not limited to just public places. The law also requires you to clean up at your own home at least once every 24 hours. If caught leaving it behind it will cost you $54, leaving it in your yard, $109. Letting the poop pile up is considered unsanitary and you could be charged with animal cruelty and a $1,000 fine.

CUSTODY BATTLE Breakups and custody battles for children can get messy. What about who gets the pet? Washington state views your pet as personal property so awarding custody for one is the same as deciding who gets the furniture, car, or equipment — meaning most likely visitation rights won’t be included. However, there is demand for a change. Even though Washington isn’t on board yet other states are. This past January, Alaska amended its divorce statutes, becoming the first state in the country to require courts to take “into consideration the well-being of the animal” allowing judges to assign joint custody of pets. It won’t be long until more states follow and hopefully sooner than later in Washington. 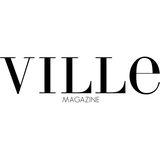