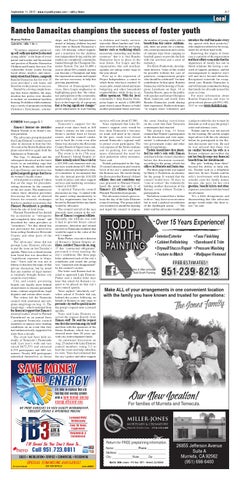 Rancho Damacitas champions the success of foster youth Bianca Hollins Special to Valley News “To nurture, empower and develop self-sufficient and well-educated young adults” is the hope of every parent and teacher and the mission and passion of Rancho Damacitas Children and Family Services. For vulnerable foster youth; having faced abuse, neglect, and uncertainty about their futures, nonprofit Rancho Damacitas has for over 35 years provided a safe home and direction on the journey to success. Started by a loving couple housing four foster children, the organization has grown over decades to include six residential facilities housing 36 children while maintaining a variety of programs including Children’s Enrichment, scholar-

KOMEN from page A-1 Komen’s Internet site identifies Sharon Tisdale as its board’s current president. The advocates group demanded that Lake Elsinore’s council reconsider its decision to host the Oct. 18 event at the Storm Stadium after plans unraveled to again hold the fundraiser in Temecula. The Aug. 31 demand and the subsequent dismissal are the latest twists in an unfolding saga that began in Temecula, shifted north to Lake Elsinore and involves two global nonprofit groups that focus on women’s health issues. A focal point is a string of videos that set the stage for precedentsetting decisions by the councils of the two cities. The undercover videos show abortion providers discussing the use of aborted fetuses for research, exchanges that have sparked accusations that Planned Parenthood is profiting from the sale of fetal tissue. Planned Parenthood has denied the accusations as “outrageous and completely false claims” and described the video providers as “extremists.” Yet that denial has not prevented the controversy from roiling Southwest Riverside County and other parts of the country. The advocates’ letter did not prompt Lake Elsinore officials to put the issue on last Tuesday’s agenda. There was a closed session item listed that was described as “significant exposure to litigation.” Yates said he was not at liberty to disclose the topic of that private discussion, but he noted that any number of legal matters is routinely brought before city councils everywhere. City and county governing boards can legally meet behind closed doors to discuss personnel items, contract negotiations, legal disputes and certain other issues. The videos left the Temecula council with emotional and religious misgivings on Aug. 11. The misgivings – which stemmed from the financial support that Komen’s national leaders award to Planned Parenthood on an annual basis – prompted Temecula council members to impose strict funding conditions on an event that they had enthusiastically supported for more than a decade. The event had been held annually at Temecula’s Promenade mall. Last year’s walk and race raised $672,553 and attracted 8,579 participants and 600 volunteers. Nearly 600 participants identified themselves as breast

ships, and Project Independence aimed at helping children beyond their time in Rancho Damacitas’s care. All housing, school support, and a transition for the children into independent living and the job market are completely community funded through the Champion Donation System. For just $1,000 a year or about $83 a month, anyone can become a Champion and help the organization sustain and expand the services necessary to help this growing population. Director of Emancipated Services, Steve Liapis emphasizes in highlighting goals that “the volunteer participation of the community, sponsorships and donations are keys to the longevity of a program that is facing significant changes” given adjustments in state funding

to children and family services statewide. More families and “children referred to Rancho are facing horrors such as trafficking which necessitate counseling and shelter resources” that it is vital Rancho Damacitas have in place in the near future. For Liapis and the organization, this and auxiliary agendas are taking center stage in the year ahead. First up is the expansion of Project Independence, a course in which those who have reached 18 secure jobs, attend school and learn budgeting and other household responsibilities while living in an offsite apartment. With the local community’s help Rancho Damacitas hopes to match a $200,000 grant from Lennar Homes to build another permanent house and raise

the number of young adults able to benefit from this course. Additionally, there are plans for a community center/gymnasium and a series of summer trips from camping to baseball games to provide the kids with fun activities and a sense of normalcy. For Kristi Piatkowski, development director, “none of this would be possible without the care of generous, compassionate people who should be celebrated” for their contribution. In that spirit, Rancho Damacitas will be hosting a Champions Luncheon on Sept. 18 at Temeku Resort, open to the public with speaker and former Olympian Mark Anderson and words from Rancho Damacitas youth sharing their experience. Piatkowski hopes “to inspire more volunteers and

introduce the staff that make every day special with their positivity” who might not otherwise be recognized for all their hard work. Removing the stigma of foster care is a priority of the organization and their efforts a reminder that the importance of family lies not in blood relations but having a network of support, guidance, and the encouragement to improve one’s self and move beyond obstacles. Recognized statewide for exceptional care, Rancho Damacitas is and will remain committed to being that family for all youth in need for years to come. For more information about Rancho Damacitas and ways to get involved, please call (951) 3022317 or visit www.4kidsfirst.org.

cancer survivors. Temecula’s support for the annual event dates back to Jeff Stone’s tenure on the council. Stone’s mother died of breast cancer, and the council continued to back the event even after Stone was elected to the Riverside County Board of Supervisors and, last November, to the state Senate. The event is in its 17th year, and Komen’s Inland Empire affiliate initially asked Temecula for a $22,500 cash donation and city services worth about $27,500. But budget concerns prompted a council committee to recommend that the city instead provide $18,828 worth of police and other support services and marketing assistance valued at $10,865. A spirited Temecula council discussion on Aug. 11 ended with the panel voting unanimously to set key requirements that had to be met by Komen before any funds would be allocated. The council said all of the race proceeds must remain in the coffers of Komen’s regional affiliate. Secondly, the affiliate was told it had to provide breast cancer awareness, detection and related services to Temecula residents that would be equal to the value of the city’s support. Katie Parker, executive director of Komen’s Inland Empire affiliate, notified Temecula on Aug. 17 that “contractual obligations” prevented it from meeting the city’s conditions. Her three-page letter addressed each of the city’s conditions and stated the group was “surprised and disappointed” by the council’s action. The letter said Komen had decided to approach Lake Elsinore. Parker sent a similar letter days later that asked for Komen’s request to be placed on that city’s next council agenda. Yates replied “absolutely not” when asked if Tisdale did any behind-the-scenes lobbying on behalf of Komen or take steps to persuade city staff to quickly move the group’s request onto a council agenda. Yates said Lake Elsinore received the request directly from Komen staff. He said the request was first discussed among city staff and then with the operators of the Storm Stadium, which was constructed more than 20 years ago with city redevelopment funds. An emotional discussion on Aug. 25 ended with Lake Elsinore council members voting 3-2 to host the event and help subsidize its costs. Yates had estimated that the city’s police and other support

services will cost about $7,500. Yates explained that Lake Elsinore’s support costs would be less than Temecula’s because no roads will need to be closed. In the past, roads were closed around Temecula’s regional mall to protect event participants. The vast expanse of the Storm stadium and its parking lots and open space eliminated the need for such pedestrian safety measures, Yates said. Tisdale participated in the Aug. 25 council discussion and voted in favor of his city’s sponsorship of the Komen race. He stated during the discussion that Komen’s Inland affiliate does not contribute any race proceeds to Planned Parenthood. He noted that only 11 of Komen’s 111 affiliates help fund Planned Parenthood programs. The advocates issued a press release the day of the Lake Elsinore council meeting. The group asked city residents to attend the meeting and urged the council to impose

the same funding restrictions on the event that their Temecula counterparts had enacted. The group’s Aug. 31 letter claimed that Tisdale’s participation in the discussion and vote represented “a substantial violation” of two government codes and other ethical regulations. Tisdale should have first identified his wife’s role with Komen and then left the council chambers before the discussion occurred, according to the group, which has offices in Murrieta and Santa Ana. The three-page letter was signed by Marty J. Nicholson, an attorney for the group. It warned that the council would have 30 days to “cure or correct” the violation by holding another discussion of the Komen event without Tisdale’s participation. Nicholson warned that a failure to do so “may leave us no recourse but to seek a judicial invalidation of the challenged action. …” His letter said the advocates would ask

a judge to order the city to meet its demands as well as pay the group’s court and attorney costs. Tisdale said he was not moved by the warning. He said he sought legal advice with the city attorney before he participated in the Komen discussion and vote. He said he was advised that there was no conflict because his wife is a Komen volunteer and neither she nor her family reaps any financial benefit from her involvement. She gets “nothing from them” beyond the ability to help others, Tisdale said in a telephone interview. In fact, Tisdale said his wife’s involvement with Komen actually costs his family money because she pays for her own gasoline, benefit tickets and other expenses associated with her board involvement. “It’s a little disingenuous and disconcerting that (the advocates group) would make this their issue,” he said.

Check out Before &amp; After pictures on Facebook Todd Smith Painting

Make ALL of your arrangements in one convenient location with the family you have known and trusted for generations:

It’s time to replace that old heating and cooling system with a new money saving energy efficient one.

For families of Murrieta and Temecula.

We service all brands 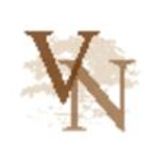