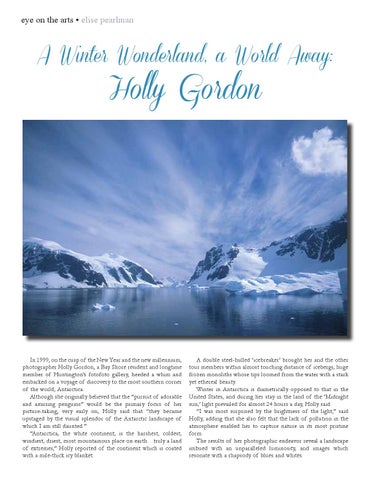 eye on the arts • elise pearlman

A Winter Wonderland, a World Away:

In 1999, on the cusp of the New Year and the new millennium, photographer Holly Gordon, a Bay Shore resident and longtime member of Huntington’s fotofoto gallery, heeded a whim and embarked on a voyage of discovery to the most southern corner of the world, Antarctica. Although she originally believed that the “pursuit of adorable and amusing penguins” would be the primary focus of her picture-taking, very early on, Holly said that “they became upstaged by the visual splendor of the Antarctic landscape of which I am still daunted.” “Antarctica, the white continent, is the harshest, coldest, windiest, driest, most mountainous place on earth…truly a land of extremes,” Holly reported of the continent which is coated with a mile-thick icy blanket.

A double steel-hulled ‘icebreaker’ brought her and the other tour members within almost touching distance of icebergs, huge frozen monoliths whose tips loomed from the water with a stark yet ethereal beauty. Winter in Antarctica is diametrically opposed to that in the United States, and during her stay in the land of the ‘Midnight sun,’ light prevailed for almost 24 hours a day, Holly said. “I was most surprised by the brightness of the light,” said Holly, adding that she also felt that the lack of pollution in the atmosphere enabled her to capture nature in its most pristine form. The results of her photographic endeavor reveal a landscape imbued with an unparalleled luminosity, and images which resonate with a rhapsody of blues and whites. 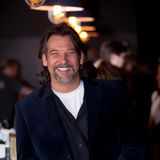 In the Village Magazine