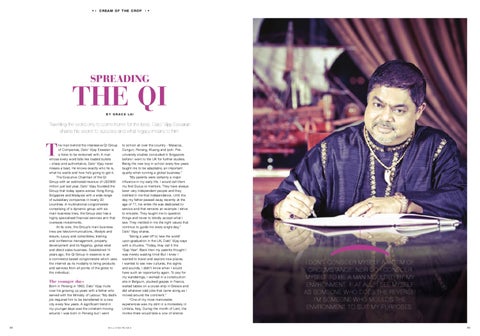 The Qi BY Grace Lai

Travelling the world only to come home for the best, Dato’ Vijay Eswaran shares his secret to success and what legacy means to him.

he man behind the impressive QI Group of Companies, Dato’ Vijay Eswaran is a force to be reckoned with. A man whose every word falls like loaded bullets – sharp and authoritative, Dato’ Vijay never misses a beat. He knows exactly who he is, what he wants and how he’s going to get it. The Executive Chairman of the QI Group with an estimated revenue of USD900 million just last year, Dato’ Vijay founded the Group that today spans across Hong Kong, Singapore and Malaysia with a wide range of subsidiary companies in nearly 30 countries. A multinational conglomerate comprising of a dynamic group with six main business lines, the Group also has a highly specialised financial services arm that oversees investments. At its core, the Group’s main business lines are telecommunications, lifestyle and leisure, luxury and collectibles, training and conference management, property development and its flagship, global retail and direct sales business. Established 14 years ago, the QI Group in essence is an e-commerce based conglomerate which uses the internet as its modality to bring products and services from all points of the globe to the individual.

The younger days Born in Penang in 1960, Dato’ Vijay mulls over his growing up years with a father who served with the Ministry of Labour. “My dad’s job required him to be transferred to a new city every few years. A significant trend in my younger days was the constant moving around. I was born in Penang but I went

to school all over the country - Malacca, Dungun, Penang, Kluang and Ipoh. Preuniversity studies concluded in Singapore before I went to the UK for further studies. Being the new boy in school every few years taught me to be adaptable, an important quality when running a global business.” “My parents were certainly a major influence in my early life. I would call them my first Gurus or mentors. They have always been very independent people and they instilled in me that independence. Until the day my father passed away recently at the age of 77, his entire life was dedicated to service and that remains an example I strive to emulate. They taught me to question things and never to blindly accept what I see. They instilled in me the right values that continue to guide me every single day,” Dato’ Vijay shares. Taking a year off to ‘see the world’ upon graduation in the UK, Dato’ Vijay says with a chuckle, “Today, they call it the ‘Gap Year’. Back then my parents thought I was merely wasting time! But I knew I wanted to travel and explore new places. I wanted to see new cultures, the sights and sounds. I didn’t know when I would have such an opportunity again. To pay for my wanderings, I worked in a construction site in Belgium, plucked grapes in France, waited tables on a cruise ship in Greece and did whatever odd jobs that came along as I moved around the continent.” “One of my most memorable experiences was my stint in a monastery in Umbria, Italy. During the month of Lent, the monks there would take a vow of silence

Clockwise from far left: Dato’ Vijay Eswaran is surrounded by kids at the closing ceremony of the company’s annual convention; With his business partner of 15 years, Joseph Bismark; Presenting a limited edition Cimier watch to Tun Mahathir; Dato Vijay Eswaran & Datin Umayal Eswaran at home; Receiving the lifetime achievement award for Regional Philanthropy at the WCEF

and not speak a word to anyone for the entire 40-day period. So amazed was I that I decided to stay in the monastery to experience being a lay monk. I managed 33 days of silence during which my life completely changed. The experience brought back into focus all that I had learnt as a young boy at my grandfather’s knees about the important of silence in spirituality. From there, I developed the base of my learning - my principles, which I have personally been practising for over 20 years. I call it the Sphere of Silence.” Dato’ Vijay’s book, In the Sphere of Silence, to date has been translated into seven languages across the world. On whether his life would have turned out differently had he not gone abroad, Dato’ Vijay shares, “The reality is, I would have ended up exactly where I am right now. It probably would have just taken longer. I think it is this nomadic instinct inbred in me that I just yearn to go abroad – whether for work or pleasure. If for nothing else, the travelling definitely brings a balance into my life.”

Establishing the Group On establishing such a multinational group, Dato Vijay shares how he started his career in different parts of the Western world. Travelling and working in the US, UK and Canada, the young Dato’ Vijay stayed abroad for 13 years before calling it quits. “I worked with some of the leading names in the IT industry but one can only take so much for so long. After a while, I became somewhat disenchanted with the cultural apathy, corporate sluggishness towards change and the glass ceiling I felt

Help Mankind. So far reaching was his influence that even great leaders like Martin Luther King and Mandela observed his teachings.” Asked on the people he has met during his extensive travels, Dato’ Vijay smiles, “When I was travelling in the UK, I had the good fortune to run into some of the world’s most amazing business idols. Sam Watson, the founder of the Wal-Mart chain for example. He was one of the world’s richest men yet what struck me most was his simplicity and just how down to earth he was. I had at least two or three conversations with him over a few weeks in the early 80s. Those conversations continue to inspire me today.” On another occasion in the early 80s, Dato Vijay shared of his encounter with an “unassuming gentleman” who later turned out to be the legendary JRD Tata himself.

What the future holds

inhibited upward mobility and growth so I made the decision to come back to Asia. This was in the early 90s, right before the Asian economic crisis and anxiety that surrounded the handover of Hong Kong to China. I got myself a ‘traditional job’ where I did extremely well and was made general manager at 32. One day, while I was away on a business trip, the ownership of the company changed hands and just like that, I came back to find that I had lost everything I worked so hard for to a new management that wanted to bring in their own team. All because I was working for someone else and had no control over my life!” With this being the turning point in his life, Dato’ Vijay realised then that he needed to shape his own future and the

only way to do that was to start something of his own. This led to his earliest business venture in the Philippines which eventually grew into what it is today – the QI Group of Companies. Dato Vijay recalls one of the biggest challenges he had in starting the group, “When I first decided to tread the path of entrepreneurship, challenges were a way of life. No one believed that we would succeed. I faced numerous failures and downfalls. In fact, I still face them today and will continue to do so to the end. I believe that the day I don’t face any challenges means I am no longer progressing. You see, to me, success is as interwoven with failure as light is to shadow. I deal with them by embracing them. There is no other way. To me,

success and failures are elements on the same path of growth.”

of the extensive surveys he carried out on the surrounding capitals in Asia before deciding on Hong Kong. To Dato’ Vijay, Lessons, mentors and friends thorough research before any decision is “One of the fundamental lessons that I made is a critical component for success have acquired along the way is coming to in business. the realisation that it is not the companies Citing Mahatma Gandhi as one that succeed, but the people behind of his greatest inspirations, Dato’ VIjay them that do. Thus the emphasis for me contends, “This may sound strange as changed dramatically from the academic Mahatma Gandhi was not a politician, approach of business plans, capital and general or a businessman. Nor was he a skills sets to identifying, recognising and prophet espousing any particular religion attracting people of like mind. People yet a great part of my business inspiration with unquantifiable attributes such as comes from him. I draw most of my determination, loyalty, trust and the ability to management principles from his teachings work hard are the fundamental points I look – Truth, Service and Raising Oneself to for nowadays,” Dato’ Vijay emphasises. help others. The QI Group’s corporate Explaining his choice of Hong Kong as philosophy is based on Gandhi’s principles the group’s headquarters, Dato’ Vijay tells and I call it RYTHM – Raise Yourself To

“The difference between success and failure is simple. The one who makes it to the top is the one who lasted, pushed and survived just that little bit longer. Giving up is easier to do than holding your ground. The thing that makes the difference is that I’m not going to give up when others do. There’s nothing secretive about it – it’s all about being able to complete the process.” On the future of the group and greater heights to climb, Dato’ Vijay believes that he is in the business of doing business. Hence the organic structure of his business ventures that allow for diversification. “We constantly strive to look for cutting edge business-oriented opportunities,” he shares. Having recently established a university in Perak, Malaysia, the Group is looking next to acquire their own fullfledged commercial banking license. “There is always something going on. I have a great team of experts who ensure the smooth running of our business ventures and operations which leaves me with time to focus on what I consider an important aspect of a person’s life – mentoring. I strongly believe that the one true legacy a person can leave behind is through mentoring. If I am able to unleash that potential in just one person – that would be the greatest achievement I can hope for,” Dato’ Vijay concludes. 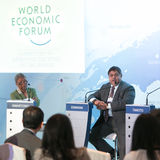 Dato' Vijay Eswaran is profiled in Asian lifestye magazine Millionaire Asia about his life before he became an entrepreneur, the challenges...

Dato' Vijay Eswaran is profiled in Asian lifestye magazine Millionaire Asia about his life before he became an entrepreneur, the challenges...