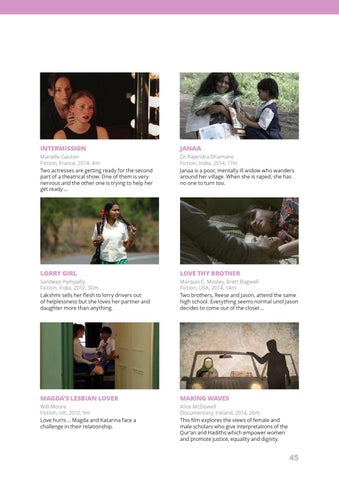 Marielle Gautier Fiction, France, 2014, 4m Two actresses are getting ready for the second part of a theatrical show. One of them is very nervous and the other one is trying to help her get ready …

Dr. Rajendra Dhamane Fiction, India, 2014, 17m Janaa is a poor, mentally ill widow who wanders around her village. When she is raped, she has no one to turn too.

Sandeep Pampally Fiction, India, 2012, 30m Lakshmi sells her flesh to lorry drivers out of helplessness but she loves her partner and daughter more than anything.

Will Moore Fiction, UK, 2012, 9m Love hurts ... Magda and Katarina face a challenge in their relationship.

Alice McDowell Documentary, Ireland, 2014, 26m This film explores the views of female and male scholars who give interpretations of the Qur’an and Hadiths which empower women and promote justice, equality and dignity.

Hello and welcome to the Fourth Viewster Online Film Festival (#VOFF4). We’re particularly excited about this edition as our theme “Share it Forward” brings to light some of the world’s most important and pressing issues. We’re incredibly proud to be able to showcase these films on a global scale.