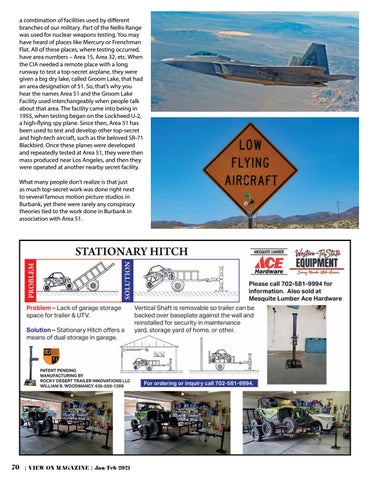 a combination of facilities used by different branches of our military. Part of the Nellis Range was used for nuclear weapons testing. You may have heard of places like Mercury or Frenchman Flat. All of these places, where testing occurred, have area numbers – Area 15, Area 32, etc. When the CIA needed a remote place with a long runway to test a top-secret airplane, they were given a big dry lake, called Groom Lake, that had an area designation of 51. So, that’s why you hear the names Area 51 and the Groom Lake Facility used interchangeably when people talk about that area. The facility came into being in 1955, when testing began on the Lockheed U-2, a high-flying spy plane. Since then, Area 51 has been used to test and develop other top-secret and high-tech aircraft, such as the beloved SR-71 Blackbird. Once these planes were developed and repeatedly tested at Area 51, they were then mass produced near Los Angeles, and then they were operated at another nearby secret facility. What many people don’t realize is that just as much top-secret work was done right next to several famous motion picture studios in Burbank, yet there were rarely any conspiracy theories tied to the work done in Burbank in association with Area 51.