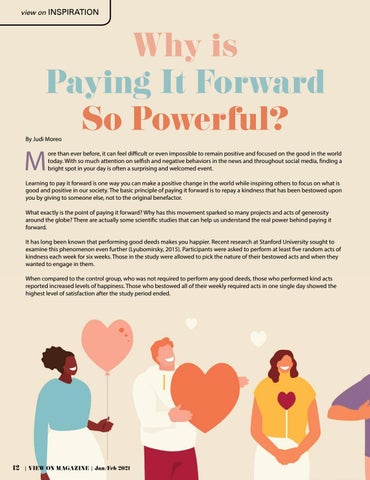 Why is Paying It Forward So Powerful? M By Judi Moreo

ore than ever before, it can feel difficult or even impossible to remain positive and focused on the good in the world today. With so much attention on selfish and negative behaviors in the news and throughout social media, finding a bright spot in your day is often a surprising and welcomed event.

Learning to pay it forward is one way you can make a positive change in the world while inspiring others to focus on what is good and positive in our society. The basic principle of paying it forward is to repay a kindness that has been bestowed upon you by giving to someone else, not to the original benefactor. What exactly is the point of paying it forward? Why has this movement sparked so many projects and acts of generosity around the globe? There are actually some scientific studies that can help us understand the real power behind paying it forward. It has long been known that performing good deeds makes you happier. Recent research at Stanford University sought to examine this phenomenon even further (Lyubomirsky, 2015). Participants were asked to perform at least five random acts of kindness each week for six weeks. Those in the study were allowed to pick the nature of their bestowed acts and when they wanted to engage in them. When compared to the control group, who was not required to perform any good deeds, those who performed kind acts reported increased levels of happiness. Those who bestowed all of their weekly required acts in one single day showed the highest level of satisfaction after the study period ended.