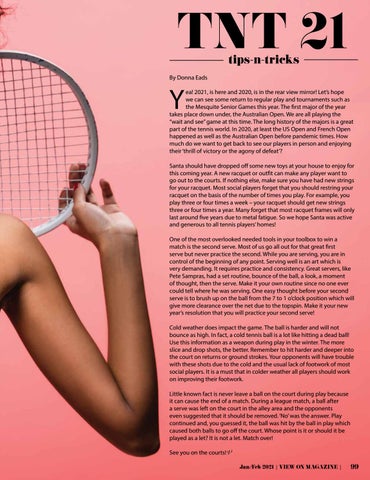 ea! 2021, is here and 2020, is in the rear view mirror! Let’s hope we can see some return to regular play and tournaments such as the Mesquite Senior Games this year. The first major of the year takes place down under, the Australian Open. We are all playing the “wait and see” game at this time. The long history of the majors is a great part of the tennis world. In 2020, at least the US Open and French Open happened as well as the Australian Open before pandemic times. How much do we want to get back to see our players in person and enjoying their ‘thrill of victory or the agony of defeat’? Santa should have dropped off some new toys at your house to enjoy for this coming year. A new racquet or outfit can make any player want to go out to the courts. If nothing else, make sure you have had new strings for your racquet. Most social players forget that you should restring your racquet on the basis of the number of times you play. For example, you play three or four times a week – your racquet should get new strings three or four times a year. Many forget that most racquet frames will only last around five years due to metal fatigue. So we hope Santa was active and generous to all tennis players’ homes! One of the most overlooked needed tools in your toolbox to win a match is the second serve. Most of us go all out for that great first serve but never practice the second. While you are serving, you are in control of the beginning of any point. Serving well is an art which is very demanding. It requires practice and consistency. Great servers, like Pete Sampras, had a set routine, bounce of the ball, a look, a moment of thought, then the serve. Make it your own routine since no one ever could tell where he was serving. One easy thought before your second serve is to brush up on the ball from the 7 to 1 o’clock position which will give more clearance over the net due to the topspin. Make it your new year’s resolution that you will practice your second serve! Cold weather does impact the game. The ball is harder and will not bounce as high. In fact, a cold tennis ball is a lot like hitting a dead ball! Use this information as a weapon during play in the winter. The more slice and drop shots, the better. Remember to hit harder and deeper into the court on returns or ground strokes. Your opponents will have trouble with these shots due to the cold and the usual lack of footwork of most social players. It is a must that in colder weather all players should work on improving their footwork. Little known fact is never leave a ball on the court during play because it can cause the end of a match. During a league match, a ball after a serve was left on the court in the alley area and the opponents even suggested that it should be removed. ‘No’ was the answer. Play continued and, you guessed it, the ball was hit by the ball in play which caused both balls to go off the court. Whose point is it or should it be played as a let? It is not a let. Match over! See you on the courts!V