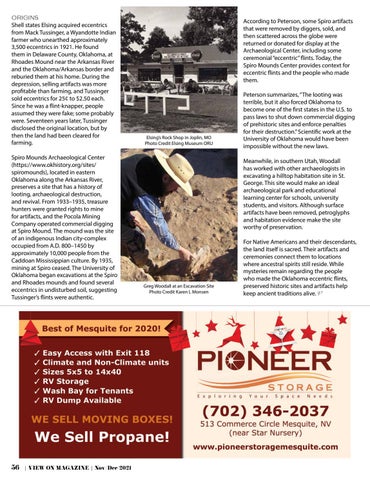 ORIGINS Shell states Elsing acquired eccentrics from Mack Tussinger, a Wyandotte Indian farmer who unearthed approximately 3,500 eccentrics in 1921. He found them in Delaware County, Oklahoma, at Rhoades Mound near the Arkansas River and the Oklahoma/Arkansas border and reburied them at his home. During the depression, selling artifacts was more profitable than farming, and Tussinger sold eccentrics for 25¢ to $2.50 each. Since he was a flint-knapper, people assumed they were fake; some probably were. Seventeen years later, Tussinger disclosed the original location, but by then the land had been cleared for farming. Spiro Mounds Archaeological Center (https://www.okhistory.org/sites/ spiromounds), located in eastern Oklahoma along the Arkansas River, preserves a site that has a history of looting, archaeological destruction, and revival. From 1933–1935, treasure hunters were granted rights to mine for artifacts, and the Pocola Mining Company operated commercial digging at Spiro Mound. The mound was the site of an indigenous Indian city-complex occupied from A.D. 800–1450 by approximately 10,000 people from the Caddoan Mississippian culture. By 1935, mining at Spiro ceased. The University of Oklahoma began excavations at the Spiro and Rhoades mounds and found several eccentrics in undisturbed soil, suggesting Tussinger’s flints were authentic.

According to Peterson, some Spiro artifacts that were removed by diggers, sold, and then scattered across the globe were returned or donated for display at the Archaeological Center, including some ceremonial “eccentric” flints. Today, the Spiro Mounds Center provides context for eccentric flints and the people who made them.

Peterson summarizes, “The looting was terrible, but it also forced Oklahoma to become one of the first states in the U.S. to pass laws to shut down commercial digging of prehistoric sites and enforce penalties for their destruction.” Scientific work at the University of Oklahoma would have been impossible without the new laws. Meanwhile, in southern Utah, Woodall has worked with other archaeologists in excavating a hilltop habitation site in St. George. This site would make an ideal archaeological park and educational learning center for schools, university students, and visitors. Although surface artifacts have been removed, petroglyphs and habitation evidence make the site worthy of preservation.

For Native Americans and their descendants, the land itself is sacred. Their artifacts and ceremonies connect them to locations where ancestral spirits still reside. While mysteries remain regarding the people who made the Oklahoma eccentric flints, preserved historic sites and artifacts help keep ancient traditions alive.V 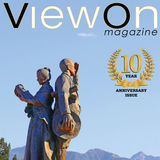