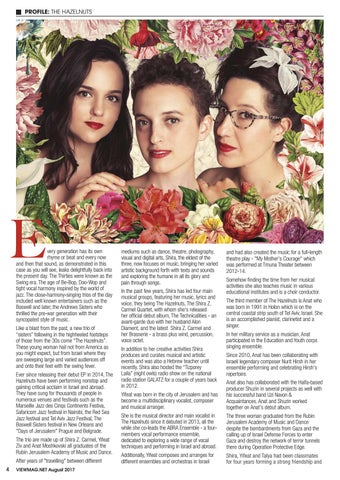 very generation has its own rhyme or beat and every now and then that sound, as demonstrated in this case as you will see, leaks delightfully back into the present day. The Thirties were known as the Swing era. The age of Be-Bop, Doo-Wop and tight vocal harmony inspired by the world of jazz. The close-harmony-singing trios of the day included well known entertainers such as the Boswell and later, the Andrews Sisters who thrilled the pre-war generation with their syncopated style of music. Like a blast from the past, a new trio of “sisters” following in the highheeled footsteps of those from the 30s come “The Hazelnuts”. These young woman hail not from America as you might expect, but from Israel where they are sweeping large and varied audiences off and onto their feet with the swing fever. Ever since releasing their debut EP in 2014, The Hazelnuts have been performing nonstop and gaining critical acclaim in Israel and abroad. They have sung for thousands of people in numerous venues and festivals such as the Marseille Jazz des Cinqs Continents Festiva, Safaricom Jazz festival in Nairobi, the Red Sea Jazz festival and Tel Aviv Jazz Festival, The Boswell Sisters festival in New Orleans and &quot;Days of Jerusalem&quot; Prague and Belgrade. The trio are made up of Shira Z. Carmel, Yifeat Ziv and Anat Moshkovski all graduates of the Rubin Jerusalem Academy of Music and Dance. After years of &quot;travelling&quot; between different

mediums such as dance, theatre, photography, visual and digital arts, Shira, the eldest of the three, now focuses on music, bringing her varied artistic background forth with texts and sounds and exploring the humane in all its glory and pain through songs. In the past few years, Shira has led four main musical groups, featuring her music, lyrics and voice, they being The Hazelnuts, The Shira Z. Carmel Quartet, with whom she&#39;s released her official debut album, The Technicalities - an avant-garde duo with her husband Alon Diament, and the latest Shira Z. Carmel and her Brasserie - a brass plus wind, percussion, voice octet. In addition to her creative activities Shira produces and curates musical and artistic events and was also a Hebrew teacher until recently. Shira also hosted the “Tizporey Laila” (night owls) radio show on the national radio station GALATZ for a couple of years back in 2012.

and had also created the music for a full-length theatre play - &quot;My Mother&#39;s Courage&quot; which was performed at Tmuna Theater between 2012-14. Somehow finding the time from her musical activities she also teaches music in various educational institutes and is a choir conductor. The third member of The Hazelnuts is Anat who was born in 1991 in Holon which is on the central coastal strip south of Tel Aviv, Israel. She is an accomplished pianist, clarinetist and a singer. In her military service as a musician, Anat participated in the Education and Youth corps singing ensemble. Since 2010, Anat has been collaborating with Israeli legendary composer Nurit Hirsh in her ensemble performing and celebrating Hirsh&#39;s repertoire.

Yifeat was born in the city of Jerusalem and has become a multidisciplinary vocalist, composer and musical arranger.

Anat also has collaborated with the Haifa-based producer Shuzin in several projects as well with his successful band Uzi Navon &amp; Acquaintances. Anat and Shuzin worked together on Anat&#39;s debut album.

She is the musical director and main vocalist in The Hazelnuts since it debuted in 2013, all the while she co-leads the ABRA Ensemble - a fourmembers vocal performance ensemble, dedicated to exploring a wide range of vocal techniques and performing in Israel and abroad.

The three woman graduated from the Rubin Jerusalem Academy of Music and Dance despite the bombardments from Gaza and the calling up of Israel Defense Forces to enter Gaza and destroy the network of terror tunnels there during Operation Protective Edge.

Additionally, Yifeat composes and arranges for different ensembles and orchestras in Israel

Shira, Yifeat and Talya had been classmates for four years forming a strong friendship and

A monthly publication from Australia which contains Profiles of passing celebrities, of Design and Art, of Travel and Hotels, of Recipes and Books, Science and all those things that are out of the ordinary.