Portfolio a collection of architecture and design projects

I am studying at the border between architecture, technology and computer graphics.

The following is a selection of works developed through academic research and competitions.

refold is a proposal for the National Concert Hall of Lithuania in Vilnius. The project was developed in collaboration with the team at Martian Republic. The rendered images are done by Graphroot.

The building is a musical hub that facilitates artistic exploration and innovation. It is a natural extension of the green hill, the current outdoor gathering place. 1 The main cultural expo and concert spaces are grouped in order to develop a flexible, multi-functional space with a common backstage That also meant there was more space for an extended foyer that can be used for smaller localized live performances or ad-hoc shows. 2 The offices are designed as a fluid open space with small outdoor private pockets, thus making it easy for the staff to enjoy the natural surroundings without direct interaction from park visitors or noise associated with. 3 Circulation follows around the main public halls and backstage, thus making sure each user group: artists, staff, performers or the public have clear paths 4 For all performance halls, the backstage was grouped together to serve the halls both in separate mode and when connected.

The big concert hall design was built around a custom made organ. It was necessary to bring something unique to the organ design and help make the inside concert hall iconic. All technical and acoustic integrity are preserved. Emerging technologies like VR, AR and Holographic Visual Effects have transformed the way we experience both music and art. Therefore the big concert hall, the small hall and the exposition room are designed so they can function both separate and connected, flexible to the spacial, technical and experience needs.

The extended Foyer helps the outsideinside integration. It was designed as small pop-up performance and gathering spots engaging the public into exploring the building even when formal performances are not taking place and giving students, music and art enthusiasts of all ages, Vilnius community or visiting tourists a place where they can play, showcase, interact or just watch performances. By developing a free range space with small musical or artistic incentives towards the visitors to interact with instruments or organizing small pop-up workshops, the development aims to draw the exterior inside. Going for a walk in the park and enjoying some music while getting some acting tips from a small workshop is what the general vibe should be to the Vilnius community and tourists.

Data Outpost follows a scenario in which humans and artificial intelligence collaborate. This is a personal, theoretical and formal exploration illustrated through a research project.

As the planet prospers in an ever growing economy, more and more spaces are developed without the presence of humans in mind. Huge warehouses, data centers and assembly lines shift from the human perspective and thrive on their own. The world of the post anthropocene, of presence beyond mankind becomes a reality of its own, parallel with the one people occupy.

At first, the station is built as a rigid structure which shall be inhabited by scientists. No matter what the geographical position may be, it will continue to be the same rigid body, with the same shape, colour or size. The second stage of the building, its growth, emerges from within the rigid body. It may become whatever it desires and whatever the inputs from the medium are. The habitats where those facilities exist are similar: freezing cold, arctic and windy, but the conditions still differ depending in which region the initial structure is placed. There may be more or less sunlight, or the wind might be less intense. By analyzing those pieces of information the outpost becomes what it needs to become to best suite its hosts and itself. The following are a series of four specimens which adapt and learn in those conditions.

The scientists, which usually passively operate tools to conduct research can now directly collaborate with the machines. This is a speculation on what could be the next step of evolution for computers in this cold and prolific medium. The devices of the initial structure get amplified and are used by the researchers as a mean to gather data and as a new interface with the entity.

Elastic Escapes is an alternative way of parking in the city of Tokyo. As more and more types of car parks are being built, the city keeps up the pace with a possible future congestion. Our team tackled this scenario as part of Rethinking Competitions.

As other metropolises face congestion, Tokyo is keeping up with this change by continuously preparing for problems that are not yet happening. Transportation is one of the most important aspects of the good behavior of the city. As people move back and forth around the city they lack places to stop, to exit the mundane. The challenge is to manage a large mass of cars when the area for car parks is limited and how can the people find a place to ease, independently from their daily spaces and routines. The base of the tower consists of tubes and pathways that continue the preexisting roads and passages. The tower has a vertical structure and stacks cars as efficient as possible. It is interrupted by several continuous floors occupied by natural or artificial parks. The ring surrounding the tower is used for its continuous maintenance, reparations and future construction. It glides up and down throughout its entire height. The footprint is as compact as it could get so that it could fit in various places around the city. There are two vertical layers of car elevators used for transportation. The exterior one is fast and gets the cars from the ground floor to one of the sectors in between the parks from where the interior layer takes the car and gets it into place. People move freely up and down between the parks with the personal capsule elevators.

Fun dwell explores the possibility of working and dwelling in a future for those who can collaborate. The project was individually developed during a semester.

The architectural solution is built upon the pre-existing factory and it addresses living and working within a community. TheÂ new and the old components will form a more resilient hybrid, one that can withstandÂ  the test of time and will be serving as a catalyst for urban transformation.Â

Dwelling remains at the core of architecture and the city. However, it is often approached statically, within the limits of legal constraints even though it represents the  most intimate spatial typology of society. Dwelling needs flexibility, adaptability and  correlation with a dynamic society which is constantly reconsidering its values and  ethos. The dwellers will change in  time, and the technology will be a key component so that when new mechanisms will  appear the old ones will be replaced. This might be integrated into a network of dwelling spots  in Bucharest, based on subscription and possibly connected to a global one. All the spaces presented in the project are for rent; from housing to office. The intent is to make people start here and then move on in a different or similar kind of place. There are a series of housing typologies in the project, starting with ground floor dwellings and more dense towards the factory. Because of the connection with the old building all kinds of new spaces emerge at the intersection. The height of the building is variable, accommodating between one and two story height. The wooden landscape would facilitate navigating the interior section of this intermediate space to the fullest, with places to store, to work or to rest. In some cases it is possible to accommodate several types of wooden boxes which would maximize the floor space.

The different types of spaces and programs are connected by a shared vertical plaza that facilitates interactions throughout the ensemble. The changes in the culture and social environment permanently affect our way of dwelling  and working. In a dense and multicultural frame, in which the technology and social  interactions get to unpredicted situations, to major changes in the environment,  architecture needs to be able to answer to them in order for us to be able to constantly  live up to our necessities.

The future of learning is up in the air. What good is a university when education is moving online? When students can learn everything from product design to data science on Udemy or Coursera the old brick-and-mortar university seems to be left without a purpose. Or not. Floating links seeks to foster the interactions, debates and the teamwork that massive open online courses could not successfully replicate. This hovering machine with a complex learning infrastructure picks up people from around the world. In this hop on hop off cluster of knowledge students dwell, develop and perform together in a holistic environment.

Public spaces that facilitate synergy and cooperation are intertwined with smaller, private spaces that aim to preserve the emergence of original ideas, that are then put to challenge. The social aspect seems to be the only feature of traditional education that is still relevant in this digital age. The university of the future is interdisciplinary and cross - platform. Floating links takes students to uncanny, but also familiar places in a continuous frenzy of intellectual interactions.

in folie aims to develop a future scenario, a society in which a reimagined Fun Palace could take place. Through performances, installations, drawings, writing and team effort the palace took life during a semester.

[…] this new, moral and spiritual, social structure of the year 2067, shows itself as a series of instable systems, in a continuous transformation, it rearranges, reorganising itself in a perpetual movement of contraction and dilatation, the pulse that conjures the basis of a new circulation, a new path for experience and in fact of the experiment; […] “fun is in the eye of the beholder”… What is in fact fun? – a process defined by an input, a field of actions augmented by layers of sensations, stimuli, colours, spontaneity, unpredictability, suspense; […] this new society, witnesses a new vocabulary in a state of permanent change; architecture folds itself in an assemblage, defined by these unstable parameters of this new . . . *link to the full manifesto

Experiences become an integral part of the economy. The contemporary obsession, ownership, will be dissolved and it will be replaced by a search for authenticity and experiment. Free-time will be spent by trying new experiences and the work that has to be performed by individuals will only require creativity and ingenuity.

The structure is defined by three layers called lanes which overlap through helixes. The users are classified as creators and spectators. They are encouraged to collaborate with each other and exchange roles. NoLane - savage nature takes over the ground floor of the existing site. SlowLane - users collide into delirious activities. FastLane - spectate and decide in the changing topography roller coaster. The spaces act as mediums, microclimates that could easily be changed, shaped and transformed as the users desire. The helixes arise where the old passages that gave character to the site existed and define a new identity. The remaining buildings on the site are used as nomad housing. People can live in the Fun Palace as they pass through the city.

The Cuttlefish is a permanent space in the Fun Place that it is not shaped by the users. This large scale area designed for a big number of people is fuelled through one of the helixes under it. This entire structure is a device, one of the cores of the Palace. The Utility Swarm is the drone infrastructure of 2067 that acts inside the Palace, in the Fast Lane and around its hive, the Cuttlefish.

For more of my digital studies visit 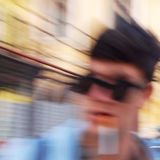