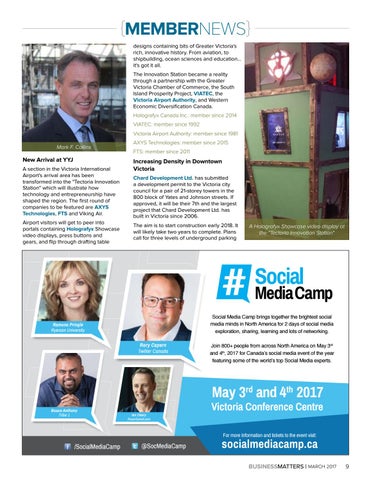 {MEMBERNEWS} designs containing bits of Greater Victoria's rich, innovative history. From aviation, to shipbuilding, ocean sciences and education... it's got it all. The Innovation Station became a reality through a partnership with the Greater Victoria Chamber of Commerce, the South Island Prosperity Project, VIATEC, the Victoria Airport Authority, and Western Economic Diversification Canada. Holografyx Canada Inc.: member since 2014 VIATEC: member since 1992 Victoria Airport Authority: member since 1981 Mark F. Collins

New Arrival at YYJ A section in the Victoria International Airport's arrival area has been transformed into the "Tectoria Innovation Station" which will illustrate how technology and entrepreneurship have shaped the region. The first round of companies to be featured are AXYS Technologies, FTS and Viking Air. Airport visitors will get to peer into portals containing Holografyx Showcase video displays, press buttons and gears, and flip through drafting table

Increasing Density in Downtown Victoria Chard Development Ltd. has submitted a development permit to the Victoria city council for a pair of 21-storey towers in the 800 block of Yates and Johnson streets. If approved, it will be their 7th and the largest project that Chard Development Ltd. has built in Victoria since 2006. The aim is to start construction early 2018. It will likely take two years to complete. Plans call for three levels of underground parking

A Holografyx Showcase video display at the "Tectoria Innovation Station"