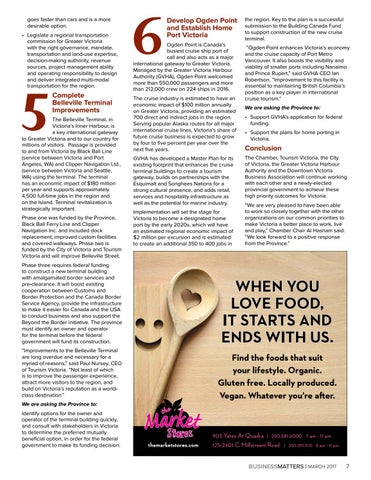 The Belleville Terminal, in Victoria’s Inner Harbour, is a key international gateway to Greater Victoria and to our country for millions of visitors. Passage is provided to and from Victoria by Black Ball Line (service between Victoria and Port Angeles, WA) and Clipper Navigation Ltd., (service between Victoria and Seattle, WA) using the terminal. The terminal has an economic impact of $180 million per year and supports approximately 4,500 full-time jobs in the region and on the Island. Terminal revitalization is strategically important. Phase one was funded by the Province, Black Ball Ferry Line and Clipper Navigation Inc. and included dock replacement, improved custom facilities and covered walkways. Phase two is funded by the City of Victoria and Tourism Victoria and will improve Belleville Street.

Ogden Point is Canada’s busiest cruise ship port of call and also acts as a major international gateway to Greater Victoria. Managed by the Greater Victoria Harbour Authority (GVHA), Ogden Point welcomed more than 550,000 passengers and more than 212,000 crew on 224 ships in 2016. The cruise industry is estimated to have an economic impact of $100 million annually on Greater Victoria, providing an estimated 700 direct and indirect jobs in the region. Serving popular Alaska routes for all major international cruise lines, Victoria’s share of future cruise business is expected to grow by four to five percent per year over the next five years. GVHA has developed a Master Plan for its existing footprint that enhances the cruise terminal buildings to create a tourism gateway, builds on partnerships with the Esquimalt and Songhees Nations for a strong cultural presence, and adds retail, services and hospitality infrastructure as well as the potential for marine industry. Implementation will set the stage for Victoria to become a designated home port by the early 2020s, which will have an estimated regional economic impact of $2 million per excursion and is estimated to create an additional 350 to 400 jobs in

the region. Key to the plan is a successful submission to the Building Canada Fund to support construction of the new cruise terminal. “Ogden Point enhances Victoria’s economy and the cruise capacity of Port Metro Vancouver. It also boosts the visibility and viability of smaller ports including Nanaimo and Prince Rupert,” said GVHA CEO Ian Robertson. “Improvement to this facility is essential to maintaining British Columbia’s position as a key player in international cruise tourism.” We are asking the Province to: • Support GVHA’s application for federal funding. • Support the plans for home porting in Victoria.

Conclusion The Chamber, Tourism Victoria, the City of Victoria, the Greater Victoria Harbour Authority and the Downtown Victoria Business Association will continue working with each other and a newly-elected provincial government to achieve these high priority outcomes for Victoria. “We are very pleased to have been able to work so closely together with the other organizations on our common priorities to make Victoria a better place to work, live and play,” Chamber Chair Al Hasham said. “We look forward to a positive response from the Province.”

Phase three requires federal funding to construct a new terminal building with amalgamated border services and pre-clearance. It will boost existing cooperation between Customs and Border Protection and the Canada Border Service Agency, provide the infrastructure to make it easier for Canada and the USA to conduct business and also support the Beyond the Border initiative. The province must identify an owner and operator for the terminal before the federal government will fund its construction.

WHEN you lovE food, it starts aNd ENds WitH us.

“Improvements to the Belleville Terminal are long overdue and necessary for a myriad of reasons,” said Paul Nursey, CEO of Tourism Victoria. “Not least of which is to improve the passenger experience, attract more visitors to the region, and build on Victoria’s reputation as a worldclass destination.”

find the foods that suit your lifestyle. organic. Gluten free. locally produced. vegan. Whatever you’re after.

We are asking the Province to: Identify options for the owner and operator of the terminal building quickly, and consult with stakeholders in Victoria to determine the preferred mutually beneficial option, in order for the federal government to make its funding decision.