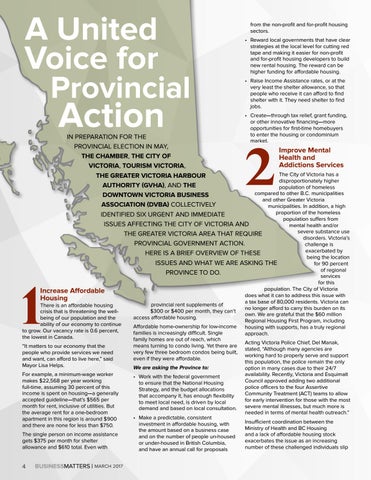 A United Voice for

• Reward local governments that have clear strategies at the local level for cutting red tape and making it easier for non-profit and for-profit housing developers to build new rental housing. The reward can be higher funding for affordable housing. • Raise Income Assistance rates, or at the very least the shelter allowance, so that people who receive it can afford to find shelter with it. They need shelter to find jobs. • Create—through tax relief, grant funding, or other innovative financing—more opportunities for first-time homebuyers to enter the housing or condominium market.

IN PREPARATION FOR THE PROVINCIAL ELECTION IN MAY, Improve Mental THE CHAMBER, THE CITY OF Health and Addictions Services VICTORIA, TOURISM VICTORIA, The City of Victoria has a THE GREATER VICTORIA HARBOUR disproportionately higher AUTHORITY (GVHA), AND THE population of homeless compared to other B.C. municipalities DOWNTOWN VICTORIA BUSINESS and other Greater Victoria ASSOCIATION (DVBA) COLLECTIVELY municipalities. In addition, a high proportion of the homeless IDENTIFIED SIX URGENT AND IMMEDIATE population suffers from ISSUES AFFECTING THE CITY OF VICTORIA AND mental health and/or severe substance use THE GREATER VICTORIA AREA THAT REQUIRE disorders. Victoria’s PROVINCIAL GOVERNMENT ACTION. challenge is exacerbated by HERE IS A BRIEF OVERVIEW OF THESE being the location ISSUES AND WHAT WE ARE ASKING THE for 90 percent of regional PROVINCE TO DO.

There is an affordable housing crisis that is threatening the wellbeing of our population and the ability of our economy to continue to grow. Our vacancy rate is 0.6 percent, the lowest in Canada. “It matters to our economy that the people who provide services we need and want, can afford to live here,” said Mayor Lisa Helps. For example, a minimum-wage worker makes $22,568 per year working full-time, assuming 30 percent of this income is spent on housing—a generally accepted guideline—that’s $565 per month for rent, inclusive of utilities. But the average rent for a one-bedroom apartment in this region is around $900 and there are none for less than $750. The single person on income assistance gets $375 per month for shelter allowance and $610 total. Even with

from the non-profit and for-profit housing sectors.

provincial rent supplements of $300 or $400 per month, they can’t access affordable housing. Affordable home-ownership for low-income families is increasingly difficult. Single family homes are out of reach, which means turning to condo living. Yet there are very few three bedroom condos being built, even if they were affordable. We are asking the Province to: • Work with the federal government to ensure that the National Housing Strategy, and the budget allocations that accompany it, has enough flexibility to meet local need, is driven by local demand and based on local consultation. • Make a predictable, consistent investment in affordable housing, with the amount based on a business case and on the number of people un-housed or under-housed in British Columbia, and have an annual call for proposals

services for this population. The City of Victoria does what it can to address this issue with a tax base of 80,000 residents. Victoria can no longer afford to carry this burden on its own. We are grateful that the $60 million Regional Housing First Program, including housing with supports, has a truly regional approach.

Acting Victoria Police Chief, Del Manak, stated, “Although many agencies are working hard to properly serve and support this population, the police remain the only option in many cases due to their 24/7 availability. Recently, Victoria and Esquimalt Council approved adding two additional police officers to the four Assertive Community Treatment (ACT) teams to allow for early intervention for those with the most severe mental illnesses, but much more is needed in terms of mental health outreach.” Insufficient coordination between the Ministry of Health and BC Housing and a lack of affordable housing stock exacerbates the issue as an increasing number of these challenged individuals slip