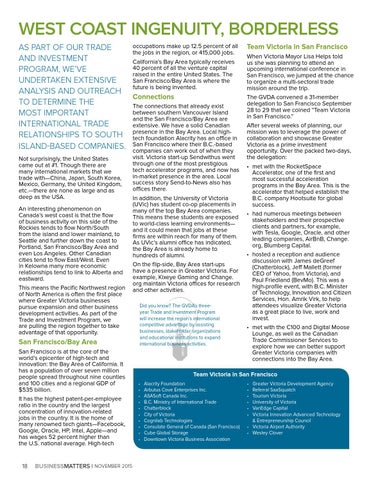 West Coast Ingenuity, Borderless occupations make up 12.5 percent of all As part of our Trade the jobs in the region, or 415,000 jobs. and Investment California’s Bay Area typically receives 40 percent of all the venture capital Program, we’ve raised in the entire United States. The San Francisco/Bay Area is where the undertaken extensive future is being invented. analysis and outreach Connections to determine the The connections that already exist between southern Vancouver Island most important and the San Francisco/Bay Area are international trade extensive. We have a solid Canadian in the Bay Area. Local highrelationships to south presence tech foundation Alacrity has an office in Francisco where their B.C.-based island-based companies. San companies can work out of when they Not surprisingly, the United States came out at #1. Though there are many international markets that we trade with—China, Japan, South Korea, Mexico, Germany, the United Kingdom, etc.—there are none as large and as deep as the USA. An interesting phenomenon on Canada’s west coast is that the flow of business activity on this side of the Rockies tends to flow North/South from the island and lower mainland, to Seattle and further down the coast to Portland, San Francisco/Bay Area and even Los Angeles. Other Canadian cities tend to flow East/West. Even in Kelowna many more economic relationships tend to link to Alberta and eastward. This means the Pacific Northwest region of North America is often the first place where Greater Victoria businesses pursue expansion and other business development activities. As part of the Trade and Investment Program, we are pulling the region together to take advantage of that opportunity.

San Francisco/Bay Area San Francisco is at the core of the world’s epicenter of high-tech and innovation: the Bay Area of California. It has a population of over seven million people spread throughout nine counties and 100 cities and a regional GDP of $535 billion. It has the highest patent-per-employee ratio in the country and the largest concentration of innovation-related jobs in the country. It is the home of many renowned tech giants—Facebook, Google, Oracle, HP, Intel, Apple—and has wages 52 percent higher than the U.S. national average. High-tech

visit. Victoria start-up Sendwithus went through one of the most prestigious tech accelerator programs, and now has in-market presence in the area. Local success story Send-to-News also has offices there. In addition, the University of Victoria (UVic) has student co-op placements in many of the top Bay Area companies. This means these students are exposed to world-class learning environments— and it could mean that jobs at these firms are within reach for many of them. As UVic’s alumni office has indicated, the Bay Area is already home to hundreds of alumni. On the flip-side, Bay Area start-ups have a presence in Greater Victoria. For example, Kixeye Gaming and Change. org maintain Victoria offices for research and other activities. Did you know? The GVDA’s threeyear Trade and Investment Program will increase the region’s international competitive advantage by assisting businesses, stakeholder organizations and educational institutions to expand international business activities.

Team Victoria in San Francisco When Victoria Mayor Lisa Helps told us she was planning to attend an upcoming international conference in San Francisco, we jumped at the chance to organize a multi-sectoral trade mission around the trip. The GVDA convened a 31-member delegation to San Francisco September 28 to 29 that we coined “Team Victoria in San Francisco.” After several weeks of planning, our mission was to leverage the power of collaboration and showcase Greater Victoria as a prime investment opportunity. Over the packed two-days, the delegation: • met with the RocketSpace Accelerator, one of the first and most successful acceleration programs in the Bay Area. This is the accelerator that helped establish the B.C. company Hootsuite for global success. • had numerous meetings between stakeholders and their prospective clients and partners, for example, with Tesla, Google, Oracle, and other leading companies, AirBnB, Change. org, Blumberg Capital. • hosted a reception and audience discussion with James deGreef (Chatterblock), Jeff Mallett (former CEO of Yahoo, from Victoria), and Paul Friedland (BevMo). This was a high-profile event, with B.C. Minister of Technology, Innovation and Citizen Services, Hon. Amrik Virk, to help attendees visualize Greater Victoria as a great place to live, work and invest. • met with the C100 and Digital Moose Lounge, as well as the Canadian Trade Commissioner Services to explore how we can better support Greater Victoria companies with connections into the Bay Area.