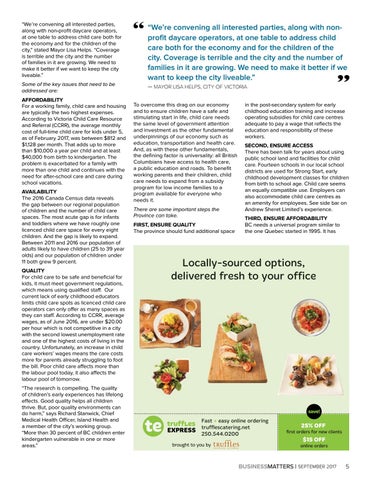 “We’re convening all interested parties, along with non-profit daycare operators, at one table to address child care both for the economy and for the children of the city,” stated Mayor Lisa Helps. “Coverage is terrible and the city and the number of families in it are growing. We need to make it better if we want to keep the city liveable.” Some of the key issues that need to be addressed are: AFFORDABILITY For a working family, child care and housing are typically the two highest expenses. According to Victoria Child Care Resource and Referral (CCRR), the average monthly cost of full-time child care for kids under 5, as of February 2017, was between $812 and $1,128 per month. That adds up to more than $10,000 a year per child and at least $40,000 from birth to kindergarten. The problem is exacerbated for a family with more than one child and continues with the need for after-school care and care during school vacations. AVAILABILITY The 2016 Canada Census data reveals the gap between our regional population of children and the number of child care spaces. The most acute gap is for infants and toddlers where we have roughly one licenced child care space for every eight children. And the gap is likely to expand. Between 2011 and 2016 our population of adults likely to have children (25 to 39 year olds) and our population of children under 11 both grew 9 percent.

“We’re convening all interested parties, along with nonprofit daycare operators, at one table to address child care both for the economy and for the children of the city. Coverage is terrible and the city and the number of families in it are growing. We need to make it better if we want to keep the city liveable.” — MAYOR LISA HELPS, CITY OF VICTORIA To overcome this drag on our economy and to ensure children have a safe and stimulating start in life, child care needs the same level of government attention and investment as the other fundamental underpinnings of our economy such as education, transportation and health care. And, as with these other fundamentals, the defining factor is universality: all British Columbians have access to health care, a public education and roads. To benefit working parents and their children, child care needs to expand from a subsidy program for low income families to a program available for everyone who needs it. There are some important steps the Province can take. FIRST, ENSURE QUALITY The province should fund additional space

in the post-secondary system for early childhood education training and increase operating subsidies for child care centres adequate to pay a wage that reflects the education and responsibility of these workers. SECOND, ENSURE ACCESS There has been talk for years about using public school land and facilities for child care. Fourteen schools in our local school districts are used for Strong Start, early childhood development classes for children from birth to school age. Child care seems an equally compatible use. Employers can also accommodate child care centres as an amenity for employees. See side bar on Andrew Sheret Limited’s experience. THIRD, ENSURE AFFORDABILITY BC needs a universal program similar to the one Quebec started in 1995. It has

QUALITY For child care to be safe and beneficial for kids, it must meet government regulations, which means using qualified staff. Our current lack of early childhood educators limits child care spots as licenced child care operators can only offer as many spaces as they can staff. According to CCRR, average wages, as of June 2016, are under $20.00 per hour which is not competitive in a city with the second lowest unemployment rate and one of the highest costs of living in the country. Unfortunately, an increase in child care workers’ wages means the care costs more for parents already struggling to foot the bill. Poor child care affects more than the labour pool today, it also affects the labour pool of tomorrow. “The research is compelling. The quality of children’s early experiences has lifelong effects. Good quality helps all children thrive. But, poor quality environments can do harm,” says Richard Stanwick, Chief Medical Health Officer, Island Health and a member of the city’s working group. “More than 30 percent of BC children enter kindergarten vulnerable in one or more areas.”