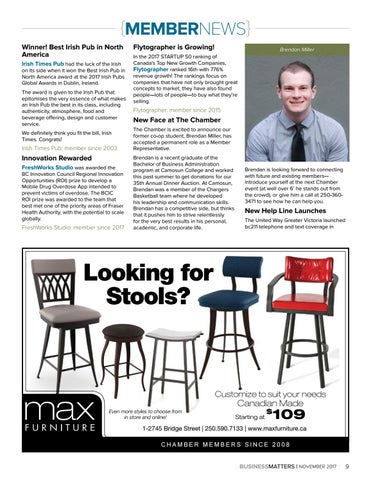 on its side when it won the Best Irish Pub in North America award at the 2017 Irish Pubs Global Awards in Dublin, Ireland. The award is given to the Irish Pub that epitomises the very essence of what makes an Irish Pub the best in its class, including authenticity, atmosphere, food and beverage offering, design and customer service. We definitely think you fit the bill, Irish Times. Congrats!

BC Innovation Council Regional Innovation Opportunities (ROI) prize to develop a Mobile Drug Overdose App intended to prevent victims of overdose. The BCIC ROI prize was awarded to the team that best met one of the priority areas of Fraser Health Authority, with the potential to scale globally.

In the 2017 STARTUP 50 ranking of Canada's Top New Growth Companies, Flytographer ranked 16th with 776% revenue growth! The rankings focus on companies that have not only brought great concepts to market, they have also found people—lots of people—to buy what they're selling.

New Face at The Chamber The Chamber is excited to announce our former co-op student, Brendan Miller, has accepted a permanent role as a Member Representative. Brendan is a recent graduate of the Bachelor of Business Administration program at Camosun College and worked this past summer to get donations for our 35th Annual Dinner Auction. At Camosun, Brendan was a member of the Chargers Basketball team where he developed his leadership and communication skills. Brendan has a competitive side, but thinks that it pushes him to strive relentlessly for the very best results in his personal, academic, and corporate life.

Brendan is looking forward to connecting with future and existing members— introduce yourself at the next Chamber event (at well over 6' he stands out from the crowd), or give him a call at 250-3603471 to see how he can help you.

Customize to suit your needs

Even more styles to choose from in store and online!