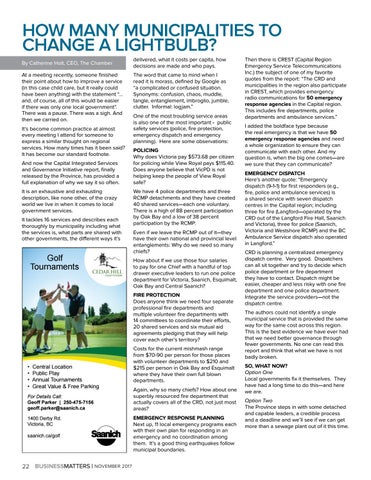 How Many Municipalities to Change a Lightbulb? By Catherine Holt, CEO, The Chamber At a meeting recently, someone finished their point about how to improve a service (in this case child care, but it really could have been anything) with the statement “… and, of course, all of this would be easier if there was only one local government”. There was a pause. There was a sigh. And then we carried on. It’s become common practice at almost every meeting I attend for someone to express a similar thought on regional services. How many times has it been said? It has become our standard footnote. And now the Capital Integrated Services and Governance Initiative report, finally released by the Province, has provided a full explanation of why we say it so often. It is an exhaustive and exhausting description, like none other, of the crazy world we live in when it comes to local government services. It tackles 16 services and describes each thoroughly by municipality including what the services is, what parts are shared with other governments, the different ways it’s

delivered, what it costs per capita, how decisions are made and who pays. The word that came to mind when I read it is morass, defined by Google as “a complicated or confused situation. Synonyms: confusion, chaos, muddle, tangle, entanglement, imbroglio, jumble, clutter. Informal: logjam.” One of the most troubling service areas is also one of the most important - public safety services (police, fire protection, emergency dispatch and emergency planning). Here are some observations: Policing Why does Victoria pay $573.68 per citizen for policing while View Royal pays $115.40. Does anyone believe that VicPD is not helping keep the people of View Royal safe? We have 4 police departments and three RCMP detachments and they have created 40 shared services—each one voluntary. There is a high of 88 percent participation by Oak Bay and a low of 38 percent participation by the RCMP. Even if we leave the RCMP out of it—they have their own national and provincial level entanglements: Why do we need so many chiefs? How about if we use those four salaries to pay for one Chief with a handful of top drawer executive leaders to run one police department for Victoria, Saanich, Esquimalt, Oak Bay and Central Saanich? Fire Protection Does anyone think we need four separate professional fire departments and multiple volunteer fire departments with 14 committees to coordinate their efforts, 20 shared services and six mutual aid agreements pledging that they will help cover each other’s territory?

Costs for the current mishmash range from $70-90 per person for those places with volunteer departments to $210 and $215 per person in Oak Bay and Esquimalt where they have their own full blown departments. Again, why so many chiefs? How about one superbly resourced fire department that actually covers all of the CRD, not just most areas? Emergency Response Planning Next up, 11 local emergency programs each with their own plan for responding in an emergency and no coordination among them. It’s a good thing earthquakes follow municipal boundaries.

Then there is CREST (Capital Region Emergency Service Telecommunications Inc.) the subject of one of my favorite quotes from the report: “The CRD and municipalities in the region also participate in CREST, which provides emergency radio communications for 50 emergency response agencies in the Capital region. This includes fire departments, police departments and ambulance services.” I added the boldface type because the real emergency is that we have 50 emergency response agencies and need a whole organization to ensure they can communicate with each other. And my question is, when the big one comes—are we sure that they can communicate? Emergency Dispatch Here’s another quote: “Emergency dispatch (9-1-1) for first responders (e.g., fire, police and ambulance services) is a shared service with seven dispatch centres in the Capital region; including three for fire (Langford—operated by the CRD out of the Langford Fire Hall, Saanich and Victoria), three for police (Saanich, Victoria and Westshore RCMP) and the BC Ambulance Service dispatch also operated in Langford.” CRD is planning a centralized emergency dispatch centre. Very good. Dispatchers can all sit together and try to decide which police department or fire department they have to contact. Dispatch might be easier, cheaper and less risky with one fire department and one police department. Integrate the service providers—not the dispatch centre. The authors could not identify a single municipal service that is provided the same way for the same cost across this region. This is the best evidence we have ever had that we need better governance through fewer governments. No one can read this report and think that what we have is not badly broken. So, what now? Option One Local governments fix it themselves. They have had a long time to do this—and here we are. Option Two The Province steps in with some detached and capable leaders, a credible process and a deadline and we’ll see if we can get more than a sewage plant out of it this time.