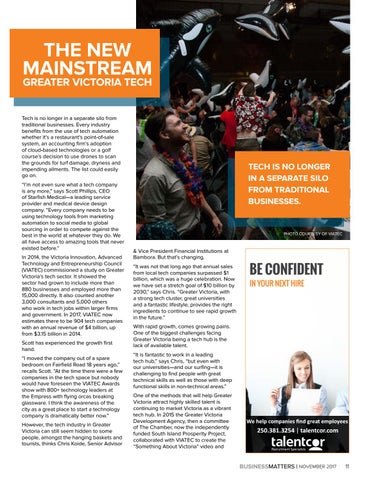 Tech is no longer in a separate silo from traditional businesses. Every industry benefits from the use of tech automation whether it’s a restaurant’s point-of-sale system, an accounting firm’s adoption of cloud-based technologies or a golf course’s decision to use drones to scan the grounds for turf damage, dryness and impending ailments. The list could easily go on. “I’m not even sure what a tech company is any more,” says Scott Phillips, CEO of Starfish Medical—a leading service provider and medical device design company. “Every company needs to be using technology tools from marketing automation to social media to global sourcing in order to compete against the best in the world at whatever they do. We all have access to amazing tools that never existed before.” In 2014, the Victoria Innovation, Advanced Technology and Entrepreneurship Council (VIATEC) commissioned a study on Greater Victoria’s tech sector. It showed the sector had grown to include more than 880 businesses and employed more than 15,000 directly. It also counted another 3,000 consultants and 5,000 others who work in tech jobs within larger firms and government. In 2017, VIATEC now estimates there to be 904 tech companies with an annual revenue of $4 billion, up from $3.15 billion in 2014. Scott has experienced the growth first hand. “I moved the company out of a spare bedroom on Fairfield Road 18 years ago,” recalls Scott. “At the time there were a few companies in the tech space but nobody would have foreseen the VIATEC Awards show with 800+ technology leaders at the Empress with flying orcas breaking glassware. I think the awareness of the city as a great place to start a technology company is dramatically better now.” However, the tech industry in Greater Victoria can still seem hidden to some people, amongst the hanging baskets and tourists, thinks Chris Koide, Senior Advisor

Tech is no longer in a separate silo from traditional businesses.

& Vice President Financial Institutions at Bambora. But that’s changing. “It was not that long ago that annual sales from local tech companies surpassed $1 billion, which was a huge celebration. Now we have set a stretch goal of $10 billion by 2030,” says Chris. “Greater Victoria, with a strong tech cluster, great universities and a fantastic lifestyle, provides the right ingredients to continue to see rapid growth in the future.”

BE CONFIDENT IN YOUR NEXT HIRE

With rapid growth, comes growing pains. One of the biggest challenges facing Greater Victoria being a tech hub is the lack of available talent. “It is fantastic to work in a leading tech hub,” says Chris, “but even with our universities—and our surfing—it is challenging to find people with great technical skills as well as those with deep functional skills in non-technical areas.” One of the methods that will help Greater Victoria attract highly skilled talent is continuing to market Victoria as a vibrant tech hub. In 2015 the Greater Victoria Development Agency, then a committee of The Chamber, now the independently funded South Island Prosperity Project, collaborated with VIATEC to create the “Something About Victoria” video and