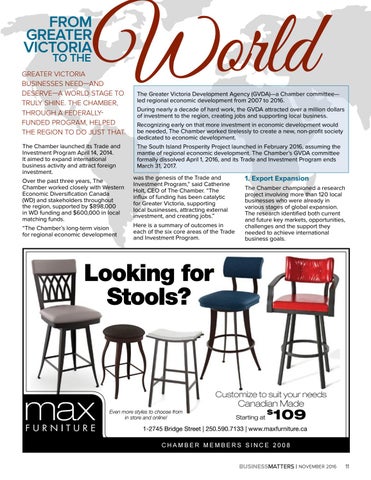 FROM GREATER VICTORIA TO THE

GREATER VICTORIA BUSINESSES NEED—AND DESERVE—A WORLD STAGE TO TRULY SHINE. THE CHAMBER, THROUGH A FEDERALLYFUNDED PROGRAM, HELPED THE REGION TO DO JUST THAT. The Chamber launched its Trade and Investment Program April 14, 2014. It aimed to expand international business activity and attract foreign investment. Over the past three years, The Chamber worked closely with Western Economic Diversification Canada (WD) and stakeholders throughout the region, supported by $898,000 in WD funding and $600,000 in local matching funds. “The Chamber’s long-term vision for regional economic development

1. Export Expansion The Chamber championed a research project involving more than 120 local businesses who were already in various stages of global expansion. The research identified both current and future key markets, opportunities, challenges and the support they needed to achieve international business goals.

Customize to suit your needs

Even more styles to choose from in store and online!