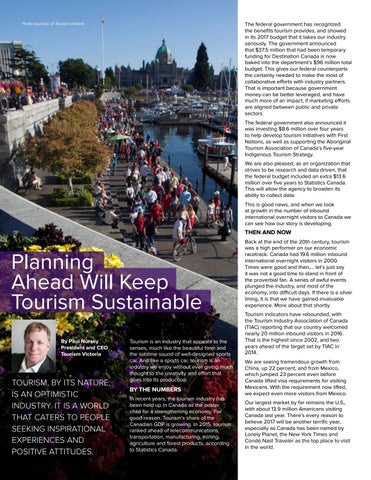 The federal government has recognized the benefits tourism provides, and showed in its 2017 budget that it takes our industry seriously. The government announced that $37.5 million that had been temporary funding for Destination Canada is now baked into the department’s $96 million total budget. This gives our federal counterparts the certainty needed to make the most of collaborative efforts with industry partners. That is important because government money can be better leveraged, and have much more of an impact, if marketing efforts are aligned between public and private sectors.

The federal government also announced it was investing $8.6 million over four years to help develop tourism initiatives with First Nations, as well as supporting the Aboriginal Tourism Association of Canada’s five-year Indigenous Tourism Strategy. We are also pleased, as an organization that strives to be research and data driven, that the federal budget included an extra $13.6 million over five years to Statistics Canada. This will allow the agency to broaden its ability to collect data. This is good news, and when we look at growth in the number of inbound international overnight visitors to Canada we can see how our story is developing.

TOURISM, BY ITS NATURE, IS AN OPTIMISTIC INDUSTRY. IT IS A WORLD THAT CATERS TO PEOPLE SEEKING INSPIRATIONAL EXPERIENCES AND POSITIVE ATTITUDES. 4

BY THE NUMBERS In recent years, the tourism industry has been held up in Canada as the poster child for a strengthening economy. For good reason. Tourism’s share of the Canadian GDP is growing. In 2015, tourism ranked ahead of telecommunications, transportation, manufacturing, mining, agriculture and forest products, according to Statistics Canada.

Back at the end of the 20th century, tourism was a high performer on our economic racetrack. Canada had 19.6 million inbound international overnight visitors in 2000. Times were good and then,… let’s just say it was not a good time to stand in front of the proverbial fan. A series of awful events plunged the industry, and most of the economy, into difficult days. If there is a silver lining, it is that we have gained invaluable experience. More about that shortly. Tourism indicators have rebounded, with the Tourism Industry Association of Canada (TIAC) reporting that our country welcomed nearly 20 million inbound visitors in 2016. That is the highest since 2002, and two years ahead of the target set by TIAC in 2014. We are seeing tremendous growth from China, up 22 percent, and from Mexico, which jumped 23 percent even before Canada lifted visa requirements for visiting Mexicans. With the requirement now lifted, we expect even more visitors from Mexico. Our largest market by far remains the U.S., with about 13.9 million Americans visiting Canada last year. There’s every reason to believe 2017 will be another terrific year, especially as Canada has been named by Lonely Planet, the New York Times and Condé Nast Traveler as the top place to visit in the world.