Once in a Lifetime Opportunity 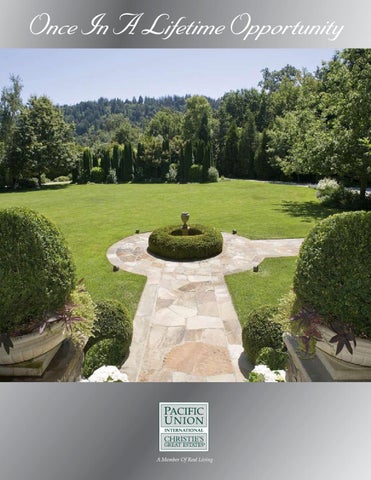 Once In A Lifetime Opportunity

Considered One Of Marin Countyâ&amp;#x20AC;&amp;#x2122;s Most Magnificent, Coveted And Gated Estates, This Extremely Rare Ross Property Has A Rich History Dating Back To 1898 And Exemplifies Classic, Traditional Elegance, While Offering An Inviting Environment With Exceptional Indoor-Outdoor Living. Remodeled and enlarged in 1998 to the highest building and design standards, the estate features a main residence, guest house, sixty foot swimming pool and separate spa. Regal lawns, lush landscaping, covered patios and gorgeous stonework carefully blend exceptional privacy with community. Nestled on 1.62 acres of completely level park-like grounds, the estate is just one block from town, Ross School and close to Katherine Branson School.

Main Residence The five bedroom main home effortlessly blends old with new, formal with casual, and grand with intimate. Exquisite craftsmanship is found throughout with crown moldings, oversized custom balusters with cherry hand rails, Paul Ferrante light fixtures, and random plank hand hewn cherry wood floors. The impressive foyer sets the tone for this superb masterpiece. The office to the left exudes an old-world feel with custom built cherry cabinetry and plaid fabric walls. The sophisticated formal living room is anchored by a Rumsford fireplace imported from France, dating back to 1642. Dramatic windows overlook the grounds while French doors open the room to a patio and the grounds beyond. The formal dining room also has four French doors opening to the patio, for graceful indoor/ outdoor entertaining. The formal dining room is perfect for large entertaining or intimate dinners. While the home has many traditional features, it is integrated with modern conveniences such as radiant-heated floors, and a state-of-the-art Crestron system, which regulates all security features, including cameras, heating and cooling, and all sound, media, and lighting throughout the home.

Kitchen/Family Room The chefâ&amp;#x20AC;&amp;#x2122;s kitchen and breakfast area benefit from modern-day style and appliances, while still embracing a refined old-world elegance. Features include: a large center island with granite counter top, double ogee edge, copper prep sink, and custom lighting; ample counter seating; Viking range with two ovens, six burners and griddle; Sub-zero custom-paneled side by side refrigerator with refrigerator and freezer drawers; Sub-zero ice maker; Miele dishwasher; reverse osmosis water filtration system; and motorized transom windows over the French doors that lead from the kitchen and family room to the patio, pool, and grounds. The family room, which opens to the kitchen, enjoys a custom fireplace flanked by two window seats and French doors opening to the swimming pool, spa and grounds.

Master Suite In addition to the bedroom, the master suite features a vestibule, an expansive spa-like bathroom, two dressing rooms with walk-in closets, and large terrace with hot tub. The bathroom enjoys antique ceramic paver flooring from Paris, custom cabinetry designed by Antonioâ&amp;#x20AC;&amp;#x2122;s Antiques of San Francisco, and is illuminated by a Paul Ferrante chandelier. An antique marble fireplace is the focal point of the bedroom, complimented by French doors with motorized custom transom windows opening to the Colorado stone patio with jetted spa overlooking the grounds.

Bedrooms On the upper level, in addition to the master suite, there are three en-suite bedrooms, while a guest suite featuring antique terra cotta tiling and Paul Ferrante fixtures is located on the main level. The upstairs bedroom suites enjoy custom built-ins and baths designed with Waterworks fixtures. They range in finishes from beadboarding, topiary shower tiling, Carrera marble floors and countertops, subway tiling, ceramic moldings, to terra cotta floors.

Recreation and Offices The main residence features a variety of areas for leisure time, recreation and work including two offices, a media and game room, a fabulous laundry room, and a workshop in the garage. The first of two offices is finished with custom cherry cabinetry, and the other located just off the kitchen features beadboarding and antique finish glass cabinetry. The media and game room, complete with grass cloth walls, blends entertainment with functionality and features a wet bar with custom oak cabinetry and a Sub-Zero refrigerator. One end of the room currently houses a billiard table, while the other serves as the media area with a large plasma television. The laundry room will please even the most discerning cleaning enthusiast, finished with beadboarding, frontloading Miele washer and dryer, multiple pull-out hampers, a built-in ironing board, Carrera marble countertops, oil-rubbed bronze faucets, and a stainless steel sink. The garage workshop has a separate entry, workbench, and plenty of storage. The mudroom enjoys beadboarding, a large closet, and Colorado stone flooring.

Guest House The two-story guest house, which was originally built as a barn for the estate, now enjoys a full gymnasium on the main level, a full bathroom with hexagon mini subway tiling and Waterworks fixtures. The upper level consists of a lovely bedroom with an inviting fireplace and features an antique brick surround.

Pool The sixty foot pool and surrounding patios are the ultimate place for recreation and relaxation. Featuring a lap lane, the pool also has underwater speakers. The nearby patios add to the ambiance, complete with a separate spa, outdoor barbeque and an exterior Rumsford fireplace.

Coast Miwok Indians lived and were sustained by the land that is now called Ross Valley for hundreds of years. European diseases eventually decimated the Indian population. The settlement in 1817 of Mission San Raphael, with its vast land holding, also resulted in further incursions into areas occupied by the Coast Miwok Indians. After the Mexican Revolution of 1821, the &quot;land grant&quot; system of parceling out land gave rise to what we now know as Marin County. Ross was originally part of an 8,877-acre Mexican land grant to Juan B.R. Cooper in 1840 known as Ranch Punta de Quentin Canada de San Anselmo. The Town of Ross itself was named in honor of James Ross, who purchased the land in 1857 for $50,000. Ross built his home on Redwood Drive and moved there with his wife and three children. The land extended from what is now Corte Madera to Red Hill in San Anselmo. In the town that bears his name, Ross built his home on the property that is now the Marin Art &amp; Garden Center. When James Ross died in 1862 his wife, Annie Ross, was forced to sell a portion of James Ross&#39; larger land holdings to pay each of their daughters $10,000. The 297 acres she had remaining make up part of the Town of Ross today. Once the Town was incorporated in 1908, one of the first actions of the new Town Council was to make it illegal to cut down trees without Town approval. Soon the streets were paved, streetlights erected, concrete bridges built over the creek and a firehouse constructed. Thanks to the foresight of our early leaders, the Town today rests under a leafy canopy that is unique in Marin County. The shaded roads and lanes enhance this lovely town of grand estates and luxury custom homes. Large properties in park-like settings often have accommodations for horses, as well as tennis courts and swimming pools. Centered around the Ross Common is a small, very quaint commercial area featuring restaurants and shops. One enterprise, the Ross Grocery, has been operated by the same family since WWII. Tennis Clubs Lagunitas Tennis Club School Links Ross School District

Trails.com- Your guide to biking and hiking around Ross

Once in a Lifetime Opportunity

Considered one of the most rare estates in Marin County, this Ross masterpiece is not to be missed. 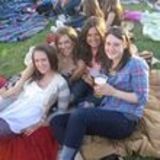