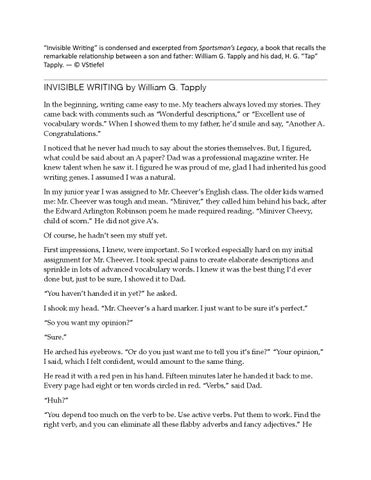 INVISIBLE WRITING by William G. Tapply In the beginning, writing came easy to me. My teachers always loved my stories. They came back with comments such as “Wonderful descriptions,” or “Excellent use of vocabulary words.” When I showed them to my father, he’d smile and say, “Another A. Congratulations.” I noticed that he never had much to say about the stories themselves. But, I figured, what could be said about an A paper? Dad was a professional magazine writer. He knew talent when he saw it. I figured he was proud of me, glad I had inherited his good writing genes. I assumed I was a natural. In my junior year I was assigned to Mr. Cheever’s English class. The older kids warned me: Mr. Cheever was tough and mean. “Miniver,” they called him behind his back, after the Edward Arlington Robinson poem he made required reading. “Miniver Cheevy, child of scorn.” He did not give A’s. Of course, he hadn’t seen my stuff yet. First impressions, I knew, were important. So I worked especially hard on my initial assignment for Mr. Cheever. I took special pains to create elaborate descriptions and sprinkle in lots of advanced vocabulary words. I knew it was the best thing I’d ever done but, just to be sure, I showed it to Dad. “You haven’t handed it in yet?” he asked. I shook my head. “Mr. Cheever’s a hard marker. I just want to be sure it’s perfect.” “So you want my opinion?” “Sure.” He arched his eyebrows. “Or do you just want me to tell you it’s fine?” “Your opinion,” I said, which I felt confident, would amount to the same thing. He read it with a red pen in his hand. Fifteen minutes later he handed it back to me. Every page had eight or ten words circled in red. “Verbs,” said Dad. “Huh?” “You depend too much on the verb to be. Use active verbs. Put them to work. Find the right verb, and you can eliminate all these flabby adverbs and fancy adjectives.” He

pointed with the tip of his pen at those excellent vocabulary words I had strung together to make my wonderfully descriptive passages. I nodded. “Okay,” I said. “Verbs. Otherwise, how is it?” “There are some other things,” he said. “But first, the verbs.” I took the paper back and found some good verbs in my thesaurus. Mr. Cheever gave my story a C+. “Don’t try to impress me” was his only comment. I showed Dad the draft of my next story. “Help, please,” I said. “You’re sure?” “I’m desperate. Miniver’s tough.” He smiled. “That’s progress.” I watched his face while he read my story. It gave nothing away. When he finished, he looked up at me. “You’ve certainly attended to your verbs,” he said. He jabbed at the paper. “Where’d you get this one?” “Nicitate? I learned that last year.” “Good word,” said Dad. “What’s it mean?” “Wink.” “That’s a better word,” he said. “Who’re you trying to impress?” I smiled. “Old Miniver.” “And?” “Now that I think of it, he mentioned the same problem on my last paper.” Dad handed my story to me. “Invisible writing,” he said. “Understand?” “No.” “Don’t try to impress your reader with how cleverly you write. These fancy words, all these adjectives and adverbs and vocabulary words”—he pronounced the word vocabulary as if it meant “disgusting human waste product”—“all they do is call attention to you. You don’t want your reader aware of your writing at all. If you do your job, you’ll have them thinking about your ideas, your arguments, your characters, or whatever it is you’re trying to communicate. If someone tells you, ‘Wow, that’s great writing,’ you know you’ve failed.” “You mean all my other teachers over the years. . .” He shrugged. “You’ve been getting bad advice.” “Well,” I said, “I appreciate yours.”

“You do?” “Yes, sir.” “That’s a good start,” he said. My next attempt brought new advice: “Tighten it up. Find the one right word, and you can get rid of a dozen wrong ones.” “Yeah,” I said, “but then my stories’ll be too short.” “Short,” said Dad, “is good.” For the rest of my high school career—I was stuck with Mr. Cheever the following year, too—I shared the drafts of my papers with Dad. He always found something new to criticize. Invisible writing, I learned, demanded conciseness and clarity, along with precise, unpretentious and hardworking verbs. It didn’t come easily to me. I labored over my stories. I tried to anticipate Dad’s criticisms. “Writing isn’t that much fun anymore,” I said to him after one of our criticism sessions. “Fun?” he smiled. “Writing is hard work, if you intend to take it seriously. It’s ironic, but the more you learn about writing, the harder it gets.” “I guess I’m beginning to see that.” “But you’re taking it seriously, huh?” “I want to get it right.” “Maybe we’ll make a writer out of you yet, then.” Over my dead body, I thought. For years I’d watched Dad at his typewriter without really understanding what I was seeing. Every night after dinner he trudged down to his basement office to work (work was a synonym for write in my home). He hunched over his ancient Underwood in a gray haze of pipe smoke, his fingers poised, staring at the yellow paper he used for rough drafts. At unpredictable times his fingers— two on each hand plus his right thumb for the space bar—would suddenly begin to hammer the keys. Then, just as abruptly, he’d stop and stare at the yellow paper. His shoulders would slump for a moment before he’d rip the paper from his machine, ball it up, and toss it over his shoulder onto the floor behind him. Then he’d roll in a clean sheet of paper and stare at it. And at the end of an evening of work, his office floor would lie buried under an ankle-deep layer of balled-up yellow paper. Now I was beginning to understand why. Writing involved more than stringing together good vocabulary words. Getting it right—making it invisible—had to be the

most painfully difficult occupation known to man. Among his other writing and editing projects, Dad wrote a monthly column for Field & Stream. In hunting and fishing circles he was—and still is—known and revered as the Tap of “Tap’s Tips.” Every month for 35 years he composed six miniature articles, each a complete essay containing useful, original and timely advice or information for the outdoorsman—how to select the best snowshoe design for your needs and conditions, how to prevent campfire soot from blackening your cooking utensils, how to pluck porcupine quills from a bird dog’s nose, how to revive matted dry flies. He published 2,500 tips altogether, I calculate. Every one of them contained between 40 and 50 words—five typed lines. No more, no less. Writing a single tip, he maintained, was harder than writing a full-length feature. Every one of them had to be a masterpiece of preciseness and clarity—a complete tale, with a beginning, a middle and an end, in 50 words or less. He allowed himself no margin for error. Every word, literally, counted. He could afford to squander none of them. Each of Tap’s Tips simply and efficiently did its job: It conveyed information. People thought of my father as an expert outdoorsman. When I learned to appreciate what he did, I found it ironic that nobody seemed to consider him an expert writer. But that fact actually gratified him. It meant, he said, that he’d succeeded in making his writing invisible. Dad’s advice eventually got me a few grudging A’s from Mr. Cheever, and sustained me through my college term papers. And his example steered me into a career that didn’t require me to write. I resisted the impulse for a long time, and when I finally gave into it, I found myself fully prepared for those long paralyzing moments of staring at my typewriter, trying to make my writing disappear. I could rip out a sheet of a paper, ball it up, and toss it over my shoulder without flinching. I learned to write to please the critic in my head, whose persistent voice kept repeating things like “Short is good,” and “Who’re you trying to impress?” To this day I sometimes ask Dad to take his red pen to my work. “You really want my opinion?” he asks. “Sure.” Fifteen minutes later he looks up at me, smiles and says, “Verbs.” 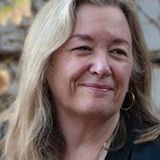