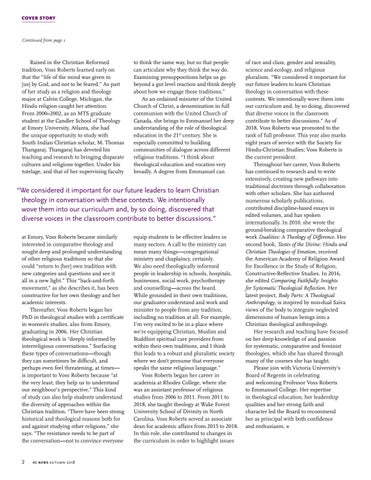 Raised in the Christian Reformed tradition, Voss Roberts learned early on that the “life of the mind was given to [us] by God, and not to be feared.” As part of her study as a religion and theology major at Calvin College, Michigan, the Hindu religion caught her attention. From 2000–2002, as an MTS graduate student at the Candler School of Theology at Emory University, Atlanta, she had the unique opportunity to study with South Indian Christian scholar, M. Thomas Thangaraj. Thangaraj has devoted his teaching and research to bringing disparate cultures and religions together. Under his tutelage, and that of her supervising faculty

to think the same way, but so that people can articulate why they think the way do. Examining presuppositions helps us go beyond a gut level reaction and think deeply about how we engage these traditions.” As an ordained minister of the United Church of Christ, a denomination in full communion with the United Church of Canada, she brings to Emmanuel her deep understanding of the role of theological education in the 21st century. She is especially committed to building communities of dialogue across different religious traditions. “I think about theological education and vocation very broadly. A degree from Emmanuel can

“ We considered it important for our future leaders to learn Christian theology in conversation with these contexts. We intentionally wove them into our curriculum and, by so doing, discovered that diverse voices in the classroom contribute to better discussions.” at Emory, Voss Roberts became similarly interested in comparative theology and sought deep and prolonged understanding of other religious traditions so that she could “return to [her] own tradition with new categories and questions and see it all in a new light.” This “back-and-forth movement,” as she describes it, has been constructive for her own theology and her academic interests. Thereafter, Voss Roberts began her PhD in theological studies with a certificate in women’s studies, also from Emory, graduating in 2006. Her Christian theological work is “deeply informed by interreligious conversations.” Surfacing these types of conversations—though they can sometimes be difficult, and perhaps even feel threatening, at times— is important to Voss Roberts because “at the very least, they help us to understand our neighbour’s perspective.” This kind of study can also help students understand the diversity of approaches within the Christian tradition. “There have been strong historical and theological reasons both for and against studying other religions,” she says. “The resistance needs to be part of the conversation—not to convince everyone

equip students to be effective leaders in many sectors. A call to the ministry can mean many things—congregational ministry and chaplaincy, certainly. We also need theologically informed people in leadership in schools, hospitals, businesses, social work, psychotherapy and counselling—across the board. While grounded in their own traditions, our graduates understand and work and minister to people from any tradition, including no tradition at all. For example, I’m very excited to be in a place where we’re equipping Christian, Muslim and Buddhist spiritual care providers from within their own traditions, and I think this leads to a robust and pluralistic society where we don’t presume that everyone speaks the same religious language.” Voss Roberts began her career in academia at Rhodes College, where she was an assistant professor of religious studies from 2006 to 2011. From 2011 to 2018, she taught theology at Wake Forest University School of Divinity in North Carolina. Voss Roberts served as associate dean for academic affairs from 2015 to 2018. In this role, she contributed to changes in the curriculum in order to highlight issues

of race and class, gender and sexuality, science and ecology, and religious pluralism. “We considered it important for our future leaders to learn Christian theology in conversation with these contexts. We intentionally wove them into our curriculum and, by so doing, discovered that diverse voices in the classroom contribute to better discussions.” As of 2018, Voss Roberts was promoted to the rank of full professor. This year also marks eight years of service with the Society for Hindu-Christian Studies; Voss Roberts is the current president. Throughout her career, Voss Roberts has continued to research and to write extensively, creating new pathways into traditional doctrines through collaboration with other scholars. She has authored numerous scholarly publications, contributed discipline-based essays in edited volumes, and has spoken internationally. In 2010, she wrote the ground-breaking comparative theological work Dualities: A Theology of Difference. Her second book, Tastes of the Divine: Hindu and Christian Theologies of Emotion, received the American Academy of Religion Award for Excellence in the Study of Religion, Constructive-Reflective Studies. In 2016, she edited Comparing Faithfully: Insights for Systematic Theological Reflection. Her latest project, Body Parts: A Theological Anthropology, is inspired by non-dual Saiva views of the body to integrate neglected dimensions of human beings into a Christian theological anthropology. Her research and teaching have focused on her deep knowledge of and passion for systematic, comparative and feminist theologies, which she has shared through many of the courses she has taught. Please join with Victoria University’s Board of Regents in celebrating and welcoming Professor Voss Roberts to Emmanuel College. Her expertise in theological education, her leadership qualities and her strong faith and character led the Board to recommend her as principal with both confidence and enthusiasm.  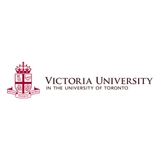