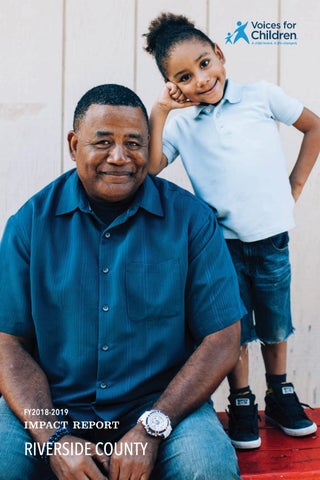 Building on a solid foundation California law allows the Juvenile Court to designate one organization per county as its official CASA program. After serving San Diego County since 1980, Voices for Children was approached by the Judicial Council of California and the local bench to rebuild a CASA program in Riverside County. Since launching its program in 2015, the team has grown to eleven staff members operating out of three offices in Riverside, Murrieta, and Palm Desert. It exceeded early goals and continues to grow, serving 412 children through the advocacy of 311 CASA volunteers during FY2018-2019.

CASA Volunteer Service Awarded In May 2019, CASAs Summer Escorcia, Andi Greer, Lynn Harris, Stacey Morse, Carmen Ortiz, John Page, Carolyn Ponder, Tami Slagill, Samantha Tehrani, and Jasmine Valdez received the Riverside Medical Clinic Charitable Foundation HERO/Anti-Bullying Award. The award recognizes individuals who are working to address bullying in a meaningful way. Each of the CASAs honored has supported a child who has struggled with social isolation or bullying. We are grateful for their outstanding commitment to their children and modeling of healthy social relationships.

As the designated CASA program for Riverside County, VFC’s CASA volunteers are authorized by the court to investigate the circumstances of a child who has been abused or neglected, spend time with the child, and make best interest recommendations to the Juvenile Court. A CASA learns about the child, observes their needs, and communicates with the other adults on the child’s case, including caregivers, social workers, and attorneys. In addition, they have the opportunity to write a report to provide information that the court might not otherwise have.

Local Leadership In FY2018-2019, Voices for Children’s Riverside County program began building a Community Advisory Council. By joining this group, community members help to spread awareness of our mission, build confidence in our work, and make a commitment to support Voices for Children. In January 2019, Lindsey Poker, vice president – digital lead at US Bank, became our first member. In June 2019, Dr. Yxstian Gutierrez, the mayor of Moreno Valley, joined the council.

ANGELICA AND CASA GAYNOR Angelica’s parents struggled with substance abuse and were not able to care for her and her siblings. Shortly after entering foster care at 17 years old, Angelica was already looking ahead to the inevitable life changes and possibilities in front of her when she turned 18. At this transformative age, she needed a caring, objective adult in her life to help her navigate foster care and the transition into adulthood. Within two months, Voices for Children matched her with CASA Gaynor. Like many youth who have experienced instability, Angelica was skeptical of CASA Gaynor at first. Gaynor was not deterred and the two began enjoying regular visits and outings, including cooking classes, going to the movies, shopping, and even donating blood together at Angelica’s request. Thanks to Gaynor’s consistent presence, the two developed a close bond, and Angelica began to trust Gaynor and let her walls down. In her reports to the court about Angelica’s progress, CASA Gaynor described the teenager as “intelligent, responsible, thoughtful, and caring.” When Angelica was interested in getting her first job, Gaynor advocated for her to get her birth certificate so she could complete applications. She supported Angelica through a successful graduation from high school with remarkable grades. And when Angelica started community college in fall 2019, Gaynor advocated for her to receive a laptop to help her complete her schoolwork. The judge agreed with the recommendation, and Angelica was thrilled to receive her very own computer and has since excelled in her classes. Today, Angelica has plans to transfer to a four-year university after completing her general education credits and hopes to pursue a career working with children.

OUR STELLAR SUPPORTERS ANNUAL GIVING HIGHLIGHTS Our mission would not be possible without the generosity and support of so many. We are grateful to the following donors who made gifts of $100 or more between July 1, 2018, and June 30, 2019. $100,000+

(FB) denotes gifts given through a Facebook fundraising campaign. 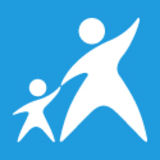