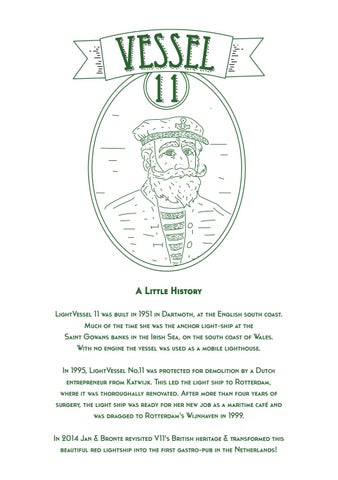 A Little History LightVessel 11 was built in 1951 in Dartmoth, at the English south coast. Much of the time she was the anchor light-ship at the Saint Gowans banks in the Irish Sea, on the south coast of Wales. With no engine the vessel was used as a mobile lighthouse. In 1995, LightVessel No.11 was protected for demolition by a Dutch entrepreneur from Katwijk. This led the light ship to Rotterdam, where it was thoroughally renovated. After more than four years of surgery, the light ship was ready for her new job as a maritime cafĂŠ and was dragged to Rotterdam&#39;s Wijnhaven in 1999. In 2014 Jan &amp; Bronte revisited V11&#39;s British heritage &amp; transformed this beautiful red lightship into the first gastro-pub in the Netherlands!