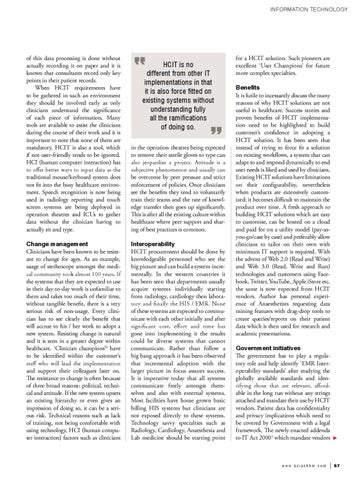 of this data processing is done without actually recording it on paper and it is known that consultants record only key points in their patient records. When HCIT requirements have to be gathered in such an environment they should be involved early as only clinicians understand the significance of each piece of information. Many tools are available to assist the clinicians during the course of their work and it is important to note that none of them are mandatory. HCIT is also a tool, which if not user-friendly tends to be ignored. HCI (human computer interaction) has to offer better ways to input data as the traditional mouse/keyboard system does not fit into the busy healthcare environment. Speech recognition is now being used in radiology reporting and touch screen systems are being deployed in operation theatres and ICUs to gather data without the clinician having to actually sit and type.

in the operation theatres being expected to remove their sterile gloves to type can also jeopardize a project. Attitude is a subjective phenomenon and usually can be overcome by peer pressure and strict enforcement of policies. Once clinicians see the benefits they tend to voluntarily train their teams and the rate of knowledge transfer then goes up significantly. This is after all the existing culture within healthcare where peer support and sharing of best practices is common.

Change management Clinicians have been known to be resistant to change for ages. As an example, usage of stethoscope amongst the medical community took almost 100 years. If the systems that they are expected to use in their day-to-day work is unfamiliar to them and takes too much of their time, without tangible benefit, there is a very serious risk of non-usage. Every clinician has to see clearly the benefit that will accrue to his / her work to adopt a new system. Resisting change is natural and it is seen in a greater degree within healthcare. ‘Clinician champions’6 have to be identified within the customer’s staff who will lead the implementation and support their colleagues later on. The resistance to change is often because of three broad reasons: political, technical and attitude. If the new system upsets an existing hierarchy or even gives an impression of doing so, it can be a serious risk. Technical reasons such as lack of training, not being comfortable with using technology, HCI (human computer interaction) factors such as clinicians

Interoperability HCIT procurement should be done by knowledgeable personnel who see the big picture and can build a system incrementally. In the western countries it has been seen that departments usually acquire systems individually starting from radiology, cardiology then laboratory and finally the HIS / EMR. None of these systems are expected to communicate with each other initially and after significant cost, effort and time has gone into implementing it the results could be diverse systems that cannot communicate. Rather than follow a big bang approach it has been observed that incremental adoption with the larger picture in focus assures success. It is imperative today that all systems communicate freely amongst themselves and also with external systems. Most facilities have home grown basic billing HIS systems but clinicians are not exposed directly to these systems. Technology savvy specialties such as Radiology, Cardiology, Anaesthesia and Lab medicine should be starting point

HCIT is no different from other IT implementations in that it is also force fitted on existing systems without understanding fully all the ramifications of doing so.

for a HCIT solution. Such pioneers are excellent ‘User Champions’ for future more complex specialties. Benefits It is futile to incessantly discuss the many reasons of why HCIT solutions are not useful in healthcare. Success stories and proven benefits of HCIT implementation need to be highlighted to build customer’s confidence in adopting a HCIT solution. It has been seen that instead of trying to force fit a solution on existing workflows, a system that can adapt to and respond dynamically to end user needs is liked and used by clinicians. Existing HCIT solutions have limitations on their configurability, nevertheless when products are extensively customized; it becomes difficult to maintain the product over time. A fresh approach to building HCIT solutions which are easy to customise, can be hosted on a cloud and paid for on a utility model (pay-asyou-go/case by case) and preferably allow clinicians to tailor on their own with minimum IT support is required. With the advent of Web 2.0 (Read and Write) and Web 3.0 (Read, Write and Run) technologies and customers using Facebook, Twitter, YouTube, Apple iStore etc. the same is now expected from HCIT vendors. Author has personal experience of Anaesthetists requesting data mining features with drag-drop tools to create queries/reports on their patient data which is then used for research and academic presentations. Government initiatives The government has to play a regulatory role and help identify ‘EMR Interoperability standards’ after studying the globally available standards and identifying those that are relevant, affordable in the long run without any strings attached and mandate their use by HCIT vendors. Patient data has confidentiality and privacy implications which need to be covered by Government with a legal framework. The newly enacted addenda to IT Act 20001 which mandate vendors 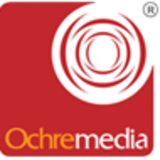 Breast cancer—a cancer that affects the breasts or mammary gland—is the second most common cancer after lung cancer and is the fifth most co...

Breast cancer—a cancer that affects the breasts or mammary gland—is the second most common cancer after lung cancer and is the fifth most co...