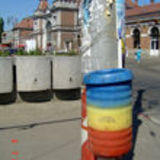 Version Magazine is an editing project initiated by the Romanian artists Gabriela Vanga, Mircea Cantor and Ciprian Muresan. Version Magazine started in 2001 as an artist initiative, an experimental platform outside the institutional framework. Version Magazine provided an open field for discussions and debates, a creative space for artists, curators, scientists, architects, historians, anthropologists, and poets among others. Version's aim was to bridge a gap between art and other domains of creation. The magazine was based on free contributions from artists and authors coming from different fields. 2000 copies of each issue were distributed free of charge on an international scale in Paris, New York, Berlin