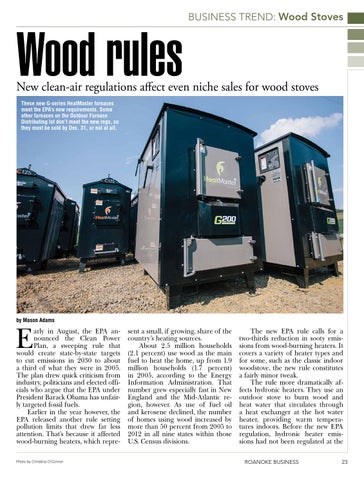 New clean-air regulations affect even niche sales for wood stoves These new G-series HeatMaster furnaces meet the EPA’s new requirements. Some other furnaces on the Outdoor Furnace Distributing lot don’t meet the new regs, so they must be sold by Dec. 31, or not at all.

arly in August, the EPA announced the Clean Power Plan, a sweeping rule that would create state-by-state targets to cut emissions in 2030 to about a third of what they were in 2005. The plan drew quick criticism from industry, politicians and elected officials who argue that the EPA under President Barack Obama has unfairly targeted fossil fuels. Earlier in the year however, the EPA released another rule setting pollution limits that drew far less attention. That’s because it affected wood-burning heaters, which repre-

sent a small, if growing, share of the country’s heating sources. About 2.5 million households (2.1 percent) use wood as the main fuel to heat the home, up from 1.9 million households (1.7 percent) in 2005, according to the Energy Information Administration. That number grew especially fast in New England and the Mid-Atlantic region, however. As use of fuel oil and kerosene declined, the number of homes using wood increased by more than 50 percent from 2005 to 2012 in all nine states within those U.S. Census divisions.

The new EPA rule calls for a two-thirds reduction in sooty emissions from wood-burning heaters. It covers a variety of heater types and for some, such as the classic indoor woodstove, the new rule constitutes a fairly minor tweak. The rule more dramatically affects hydronic heaters. They use an outdoor stove to burn wood and heat water that circulates through a heat exchanger at the hot water heater, providing warm temperatures indoors. Before the new EPA regulation, hydronic heater emissions had not been regulated at the ROANOKE BUSINESS 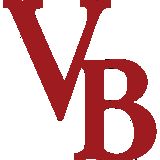