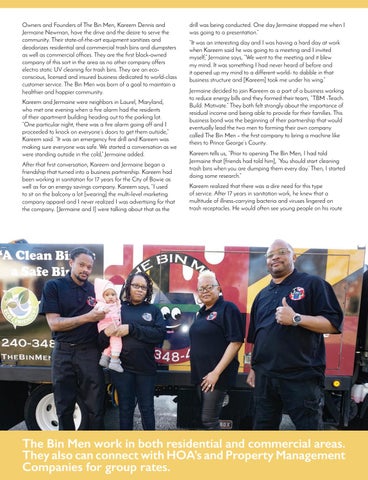 Owners and Founders of The Bin Men, Kareem Dennis and Jermaine Newman, have the drive and the desire to serve the community. Their state-of-the-art equipment sanitizes and deodorizes residential and commercial trash bins and dumpsters as well as commercial offices. They are the first black-owned company of this sort in the area as no other company offers electro static UV cleaning for trash bins. They are an ecoconscious, licensed and insured business dedicated to world-class customer service. The Bin Men was born of a goal to maintain a healthier and happier community. Kareem and Jermaine were neighbors in Laurel, Maryland, who met one evening when a fire alarm had the residents of their apartment building heading out to the parking lot. “One particular night, there was a fire alarm going off and I proceeded to knock on everyone’s doors to get them outside,” Kareem said. “It was an emergency fire drill and Kareem was making sure everyone was safe. We started a conversation as we were standing outside in the cold,” Jermaine added. After that first conversation, Kareem and Jermaine began a friendship that turned into a business partnership. Kareem had been working in sanitation for 17 years for the City of Bowie as well as for an energy savings company. Kareem says, “I used to sit on the balcony a lot [wearing] the multi-level marketing company apparel and I never realized I was advertising for that the company. [Jermaine and I] were talking about that as the

drill was being conducted. One day Jermaine stopped me when I was going to a presentation.” “It was an interesting day and I was having a hard day at work when Kareem said he was going to a meeting and I invited myself,” Jermaine says, “We went to the meeting and it blew my mind. It was something I had never heard of before and it opened up my mind to a different world- to dabble in that business structure and [Kareem] took me under his wing.” Jermaine decided to join Kareem as a part of a business working to reduce energy bills and they formed their team, “TBM -Teach. Build. Motivate.” They both felt strongly about the importance of residual income and being able to provide for their families. This business bond was the beginning of their partnership that would eventually lead the two men to forming their own company called The Bin Men – the first company to bring a machine like theirs to Prince George’s County. Kareem tells us, “Prior to opening The Bin Men, I had told Jermaine that [friends had told him], ‘You should start cleaning trash bins when you are dumping them every day.’ Then, I started doing some research.” Kareem realized that there was a dire need for this type of service. After 17 years in sanitation work, he knew that a multitude of illness-carrying bacteria and viruses lingered on trash receptacles. He would often see young people on his route

The Bin Men work in both residential and commercial areas. They also can connect with HOA’s and Property Management 30 | February 2021 Companies for group rates.

Simply Bowie is the definitive resource for Bowie most dynamic intown neighborhood. With a commitment to journalistic excellence, the magazine serves as the authority on who to know, what to do and where to go in Bowie and Gambrills, MD. Simply Bowie focuses on exposing the neighborhood's best and brightest, especially those typically ignored by other media outlets. It is published 12 times a year, distributing 50,000copies on more than 250 stands in more than eight zip codes, and is also available in its entirety online at Simplymagazines.net Simplymagazines.net 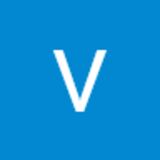